Is the Social Function of Religion Changing?

Is the Social Function of Religion Changing? August 23, 2009 Epiphenom 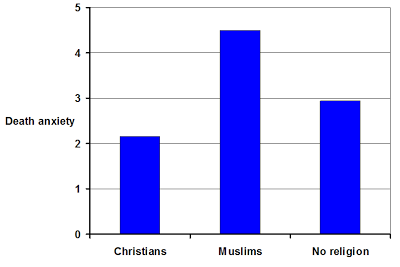 One of the leading theories of why religion is so popular goes by the ominous name of ‘Terror Management Theory’. Put simply, this is the idea that people turn to religion to ease their fear of death.

Gareth Morris and Tina McAdie, of Huddersfield University in the UK, set out to test this idea in a group of mostly young people (a mix of Christians, Muslims, and the non-religious) recruited within the University.

The study was simple, but the results were very interesting.

While Christians did indeed have a lower death anxiety than the non-religious, Muslims did not. In fact, their death anxiety was markedly higher than both the other groups.

When the participants were asked to explain why they felt the way they did about death, the reasons for the anxiety of Muslims became clear:

[For Christians] themes of heaven and eternal life are prevalent, whereas for Muslims the afterlife may be something to fear (“I don’t know if I have been a good Muslim and so go to heaven or hell”).

In other words, the Christians in this group had low death anxiety because they mostly don’t believe in hell!

This focus on heaven, and disbelief in Hell, is very popular among Western Christians today. But it’s a fairly recent development. For most of the history of Christianity, the fear of punishment in Hell was an ever-present and vivid theme.

So it seems to me that the major difference between these two groups is not between Islam and Christianity but between traditional religious ideas and modern ones. So the question then is, why the change? How come Christianity in the West is steadily abandoning traditional concepts of Hell?

The function of Hell is to reinforce social order by threatening punishment to wrongdoers who can’t be brought to justice by normal societal mechanisms. As a strategy, it’s not terribly successful. Medieval Europe is not renowned as an era of peace, justice and harmony.

But perhaps in the absence of more effective social controls, promoting fear of hell is better than nothing. When better social controls are invented – such as in modern Europe – Hell is no longer needed.

If Hell is no longer needed in modern Europe, then Heaven still is. People still die, and our basic, evolved instincts make us all fear of death. The prospect of heaven can reduce that fear – but only if you abandon the inconvenient concept of hell.

So the ‘Terror Management’ explanation for religion might be a Western phenomenon, born from the recent innovation which holds that the afterlife offering only rewards, not punishment. In the past, the prospect of meeting their maker probably did not ease people’s anxiety.

What about the people with no religion? That’s a pretty amorphous group. It’s not clear how many of them believed in life after death. Life after death is one of the most common residual beliefs among the nominally religious (presumably because it helps to reduce death anxiety!). So it might be that

But it would be interesting to see what level of death anxiety there is among committed atheists, rather than the non-religious. In theory, atheists should have low death anxiety since, to paraphrase Epicurus, what do you have to fear from non-existence? However, I wonder whether this cognitive rationalisation is enough to overcome the innate psychological instinct!

[I’m currently on vacation in France – this was posted by robots!]

Beach Reach: What It's Really About
Roll to Disbelieve
Related posts from Epiphenom