By their faces you will recognize them 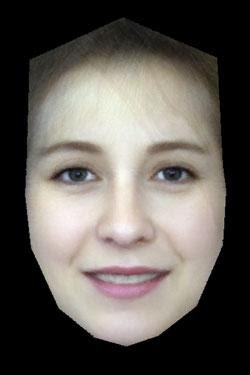 Does this look like a religious woman to you? According to a study by Prof Richard Wiseman in the New Scientist in February this year (hey, I’ve only just read it, OK?), this is a typical face of a religious person in the UK.

What they did was to ask readers to send in photos of themselves, along with a rating of their personality. They digitised the key features, and produced an average of each personality type. When other people were asked to guess the personality based on face alone, they were pretty accurate for religious women – 73% got it right.

There was lots of stuff in the article about why this might be (androgens or other genetic linkages, for example), but no mention of one blindingly obvious explanation.

You see, the most striking difference between the ‘religious’ face and the ‘non-religious’ one is that the non-religious face is smiling.

In fact, the same goes for all the pairs of female faces that the raters were able to identify correctly. The lucky face and the trustworthy face are both smiling.

The raters couldn’t get the male faces right. And sure enough, neither pair of male faces are smiling. It seems that it’s the smile that gives the game away. In a letter in the 21 March issue, a reader points this out:

Our brains seem to be hard-wired to interpret smiling positively. Nearly all of your data can be explained by it, yet the experiment does not control for smiles.

Only the paired female images gave positive results, and those were the pairs that exhibited greater differences in their smiles. For example, both composite faces under the “Humorous?” heading are smiling to a similar extent, and there was no difference found between them. In the “Religious?” category, we might suppose that people would consider those who are religious to be more serious, and the image with the smaller smile is indeed chosen by the majority.

Wiseman responds by conceding that smiling might explain ‘some’ of the results. But points out that religious people are supposed to be happier than the non-religious.

That would explain why the religious people didn’t smile. They knew, of course, that the photograph was going to be linked to their personality traits. And that knowledge would undoubtedly change their behaviour.

Interestingly, both religious and non-religious, and the raters, knew the rules of the game. Religious people in the UK aren’t supposed to be smiley!