For less-religious Americans, compassion is a significant factor in prosocial behaviour

For less-religious Americans, compassion is a significant factor in prosocial behaviour May 21, 2012 Epiphenom

Apologies if you saw this one when it came out last month, but it’s an interesting study that really deserves a closer look!

Laura Saslow (University of California at San Francisco) and colleagues wanted to know whether compassion influenced the prosocial tendencies (altruism, generosity, trust etc) of the religious and non religious. So they ran three different studies – different groups of people, and different tests.

In the first, they found that across the USA (looking at data from the 2004 General Survey), religious people were slightly more likely to say that they did prosocial things like giving food or money to a homeless person, returning money after getting too much change, allowing a stranger to go ahead in line, volunteering time for a charity, etc. They were also more likely to say that they were compassionate (for example, that they often have tender, concerned feelings for less fortunate people, or that when they see someone being taken advantage of, they feel kind of protective towards them).

Now, that’s not too surprising – it’s been known for a long time that religious people report being more prosocial (although whether they are is another matter!). However the interesting finding is that the difference between compassionate and non-compassionate people was much bigger for the less religious than for the more religious.

In a second study, they asked American adults to watch one of two videos. The first was about child poverty, the second was just a clip of two guys talking. Then they were asked various apparently non-related things – like how much salary should be spent on charity, or how much they would donate in the Dictator Game.

In the final study, they brought a group of students to the lab and asked them how compassionate they were feeling right now. Then they got them to go through a battery of games designed to test prosocial behaviour – basically these are all variants of the “Prisoners Dilemma”, in which the subjects have to give money, or bet money in the hope that their anonymous co-players will reciprocate. 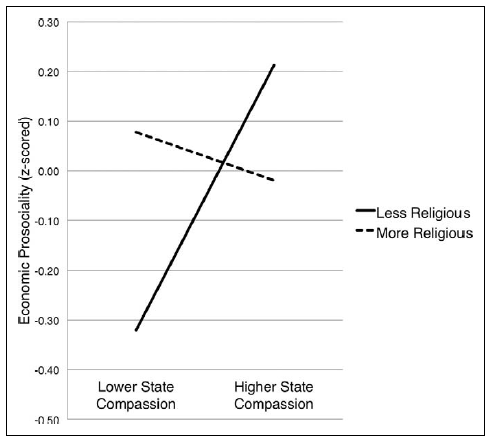 The authors think these results suggest that the less religious are bound to others by emotional connection. They go on to say that:

The more religious, on the other hand, may ground their generosity less in emotion and more in other factors such as doctrine, a communal identity, or reputational concerns.

That seems likely. In fact, I think there’s probably an additional factor here – because these studies took place in the USA,  where religion is the social norm.

It could be that religious people assume that the recipients of their generosity are co-religionists – in most US communities, that’s a pretty strong likelihood. Therefore pro-social behaviour is less about pure altruism and more about group norms of back scratching and favours being returned – reciprocal altruism.

Atheists, on the other hand, may feel like outsiders, and so be less inclined to be pro-social – unless they are in a compassionate frame of mind for some reason.

May 16, 2012
Distrust of atheists is reduced if people have confidence in law and order
Next Post