Repetitious magic rituals are thought to be more effective

Repetitious magic rituals are thought to be more effective May 26, 2012 Epiphenom 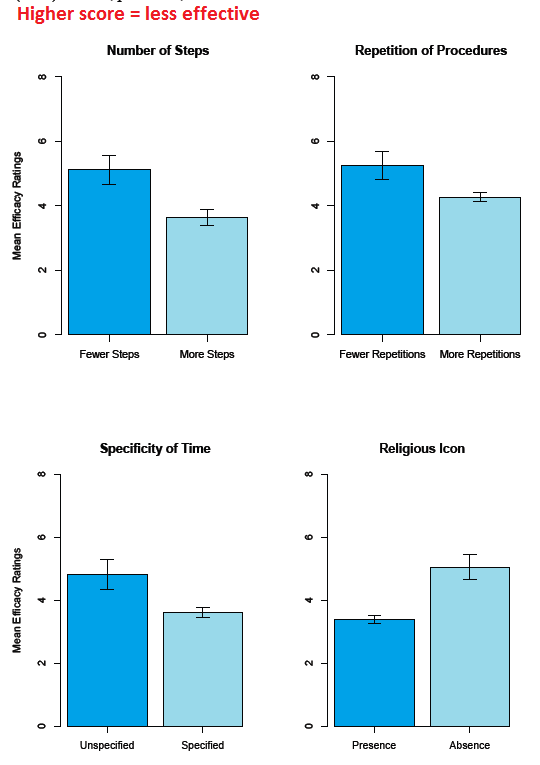 Magical rituals – routines designed to bring about a real-world effect, like curing disease or cursing a rival – have been part of human society since as far back as anyone can tell. So, as a species, we’ve had plenty of time to sort out what works and what doesn’t.

But the question is, do people have a gut feeling for what makes a good ritual? To find out, Cristine Legare (University of Texas at Austin) headed to the city of Belo Horizonte, located in the south-eastern region of Brazil. Brazilian culture is suffused with all sorts of magical rituals – they call them simpatias. Here’s an example:

“Buy a new sharp knife and stick it four times into a banana tree on June 12th at midnight (i.e., Valentine’s day in Brazil, Saint Anthony’s day is on the 13th). Catch the liquid that will drip from the plant’s wound on a crisp, white paper that has been folded in two. The dripping liquid captured on the paper at night will form the first letter of the name of your future partner”

Working with a colleague, she created a large number of variations of real simpatia. Each was modified so as to accentuate one of nine different characteristics:

Then she asked the locals which of these rituals was the most effective. It turned out that varying most of these characteristics had no effect on the perceived efficacy of  the rituals.

However, she find that simpatia that insist on a specific time, or that have more individual steps and more repetitions of those steps, or that specify the involvement of a supernatural agent, were thought to be more effective.

But perhaps this is just about simpatias in that cultural context, and not about magical rituals in general?

So Legare tested these same simpatias on US college students, and found pretty similar results. At least, all the trends were the same, although statistically it wasn’t as robust because the US students were less likely to think that any of the rituals would have any effect. College education does pay off after all!

Legare thinks that the the problem with magical rituals is that it’s very hard to know whether or not they work. So, in the absence of evidence, we tend to go for ones that intuitively seem more likely to work. And that means ones with more steps and more repetitions.

After all, if doing something once has some effect, then repeating it has to have a greater effect – and so we prefer rituals that hyper-activate our instinctive understanding of cause and effect.

And appealing to a supernatural being has surely got to help, too!

May 21, 2012
For less-religious Americans, compassion is a significant factor in prosocial behaviour
Next Post