People say they’re good if they think God is watching

If you subliminally remind people about God, it can change their behaviour in all sorts of interesting ways. It can make people more honest, more obedient, more punishing, and even more persevering against impossible odds. And although it’s not certain, it seems to work for atheists as well as the religious.

Nobody really knows quite how this effect works, but one possibility is that reminding people about God creates in them the sensation that they are being watched. If people feel like they’re being watched, their behaviour changes markedly (even simply stick a photo of a pair of eyes in their peripheral vision, and they cheat less and condemn more).

Will Gervais and Ara Norenzayan, at the University of British Columbia, wanted to test this theory. One way they did this was to prime undergrads with thoughts of god – explicitly, not subliminally. They primed others with thoughts of other people, or nothing in particular. 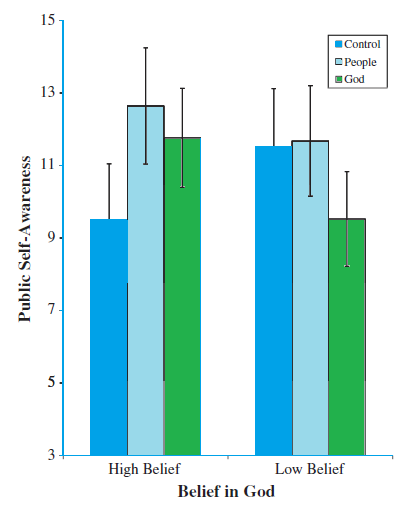 As you can see in the graph, the results they got were different for believers and non-believers.

Believers had low self-consciousness in the control condition, and their self-awareness was increased by both the People and the God priming.

Non-believers had higher self-consciousness in the control condition, which was unaffected by the people prime and actually went down with the God prime!

They also ran another experiment, which looked at something called ‘socially desirable responding’. That’s the tendency we all have to say the ‘right thing’.

For example, if you ask people if they are “sometimes irritated by people who ask favours of me” they will usually say no – whereas, in reality of course, any normal person is sometimes irritated in that situation. We know we shouldn’t be, but we are.

What these studies show is that god primes really do seem to trigger responses that you would expect if people felt they were being watched. That’s certainly the case for believers, although perhaps not so for non-believers.

January 13, 2012
Religion and health - a double edged sword
Next Post