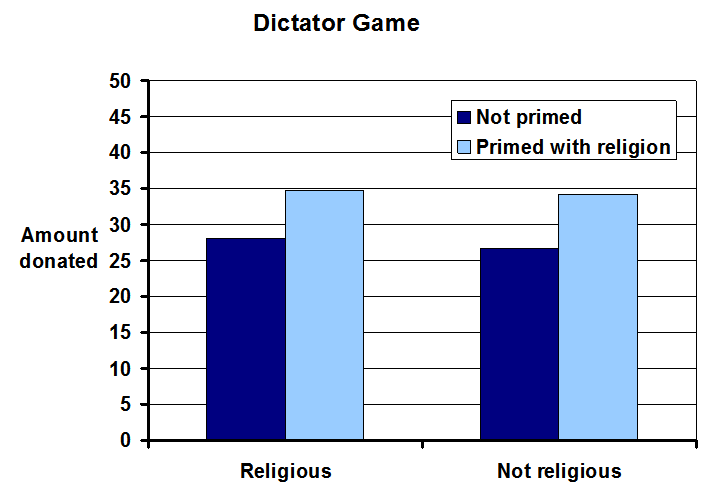 A strange phenomenon, which has been noticed before in a couple of studies in the USA, is that people (well, students) tend to behave more nicely if you surreptitiously prime their minds with religious thoughts. When you get an unexpected result like that, the worry is that it’s just a chance finding.

It’s a common concern in the study of the psychology of religion (and science in general), because so few findings are replicated by other researchers. That’s why a new study, by Ali Ahmed at Linnaeus University and Osvaldo Salas at the University of Gothenburg (both in Sweden) is particularly interesting. 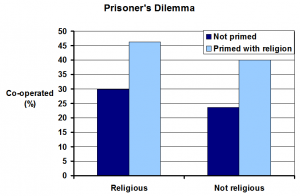 They tested 224 students at Pontificia Universidad Católica de Valparaíso in Chile (yes, Chile, not Sweden – don’t ask me!), using two of the favourite laboratory tests of ‘niceness’ – the Dictator Game and the Prisoner’s Dilemma. The Dictator Game simply gives the participant some money, and offers them the chance to donate as much as they want to another, anonymous player. The Prisoner’s Dilemma asks you to either co-operate or default on another anonymous player.

The students were primed in a classic way – they were given a jumble of words, and had to form them into sentences (there’s more details of this at the foot of the post). Half the students got sentences with a religious theme. As you can see, the students who got the religious prime tended to be more generous and co-operative – regardless of whether or not they thought of themselves as religious.

There was no difference between the religious and non-religious students, either in the primed or non-primed state. What mattered was not whether they were religious, but whether they had been primed with religious thoughts. (In the Prisoner’s Dilemma game, the non-religious were a bit less co-operative overall, but this was not statistically significant).

This basically backs up results seen in students in the USA, which suggests that it;s not a purely chance or cultural effect. Of course, the big question is why it happens. Ahmed and Salas offer up three possibilities:

So, basically, we need some more studies to sort this one out – in older people, and with non-religious ‘prosocial’ primes as a control! 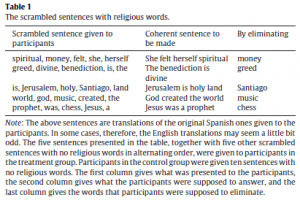