Submission and obedience are prominent themes in the major monotheisms. However, until now no-one has tested whether religion can actually make people more obedient.

Vassilis Saroglou, a psychologist at Université catholique de Louvain, conducted a clever priming study. The gist of it was that the subjects were asked to write a short essay, which was then marked by another (imaginary) subject. The marker always gave a rather scathing review.

Then the subject was asked to choose some questions for the marker. They could chose from a mix of easy, medium, or difficult questions.

For half of the subjects, the researcher asked them to select difficult questions, in retribution. Also, half the subjects were given a subliminal religious prime, making four groups in total. 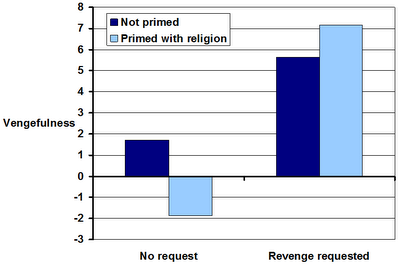 And this is what happened. If you look at those subjects that were left to make their own minds up, you can see that those without the religious prime had a slight tendency to choose the more difficult questions. Those with the religious prime were slightly forgiving.

But when the experimenter actually asked them to take revenge, the pattern reversed. Although both groups were more vengeful, those who had been primed with religion flipped from being least vengeful to most vengeful.

It seems that, when the subjects were left to choose for themselves, the religious prime tended to make them more forgiving. But when the experimenter asked for revenge, they complied willingly.

Now, this doesn’t necessarily apply to religion in general. The subjects were psychology undergrads at a Belgian University. Although their religious affiliations aren’t disclosed, we can take a guess.

June 27, 2009
Why should government welfare mean less religion?
Next Post