It looks like my paper in Journal of Religion and Society should be published any day now! I’ll post a summary here when it is – this post is by way of a bit of background.

Here’s a big question: why are there more religious people in some countries than others? To some extent, that’s easy to explain. Richer countries tend to have fewer religious people. But why, for example, is the USA so religious relative to European countries? 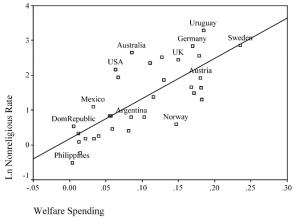 This was a question that Anthony Gill and Erik Lundsgaarde tackled by in 2004. They analysed the data from a range of countries, and found that the greater proportion of GDP that was spent on government welfare, the more non-religious people there were and the lower church attendance was. This held true even after statistically adjusting for other factors, like per-capita GDP, urbanization, government regulation of religion, and religious pluralism.

Now, this might explain why the USA is less religious than Europe. But what explains the link? Gill and Lundsgaarde’s explanation seems unlikely to me.

They reckon that religion provides a service, the provision of welfare, and that with the availability of government welfare the demand for religion falls away. In other words, they’re thinking within the ‘rational choice’ theory of religion.

There are some other tidbits of information that give a different perspective. Pippa Norris, in a book also published in 2004 (Sacred & Secular), suggested that the major reason people turn to religion as a psychological buffer to hardship and adversity.

Now put this with a third paper, the controversial publication in 2005 of a paper that claimed that religious countries had worse ‘societal health’. That paper, by Gregory S Paul, was published in the Journal of Religion and Society.

Paul found that religious countries were worse on a range of outcomes, like murder rate, infant mortality, teenage pregnancies, and sexually transmitted diseases.

Could this explain the link between welfare and religiosity? Perhaps it’s not simply that people choose to get their handouts from the government, so give up going to church. Perhaps government welfare programmes are simply quite effective in creating societies that are less stressful places to live.

Maybe those governments that spend national wealth on reducing hardship also reduce the personal tragedies that draw people into religion. That’s the hypoethesis that I wanted to test.

Paul, Gregory S (2006). Cross-National Correlations of Quantifiable Societal Health with Popular Religiosity and Secularism in the Prosperous Democracies: A First Look Journal of Religion and Society, 7

June 24, 2009
The more government interferes with religion, the less satisfaction it brings you
Next Post