The more government interferes with religion, the less satisfaction it brings you

The more government interferes with religion, the less satisfaction it brings you June 24, 2009 Epiphenom

It’s well known that, if you take a cross section of a typical western society, the people who are most likely to say that they are happy and satisfied with their lives are the religious. That’s a fact that’s often put forward as an argument for the government to encourage religious involvement.

Marta Elliott (University of Nevada) and R David Hayward (Duke University) have analysed data from 65 countries in the World Values Survey to see how ‘life satisfaction’, religious identity and attendance, and government regulation of religion interact.

What they found was pretty interesting. After controlling for a range of other factors that influence happiness, they found that having a religious identity (that is, being a self-declared ‘religious person’, as opposed to a non-religious person or an atheist), was indeed linked to satisfaction. The effect is quite strong – being religious is about half as effective as being married. 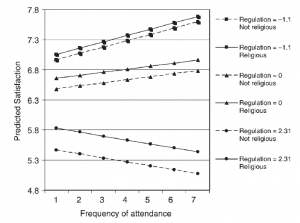 Then they looked at religious attendance. Here too, they found a link between attendance and happiness. In countries with low regulation, people who attend religious services more often tend to be more satisfied with their lives.

But in countries with high regulation, the relationship flips. In highly regulated countries, regular attenders at religious services are actually less satisfied with their lives. It seems that government encouragement of religious worship can actually end up with people going to church against their preferences.

There’s another point to be drawn from this analysis. At first blush, you would take it as evidence that religious people are more satisfied. That might be so, but that’s not what’s been shown here.

That’s because they control for other factors that affect happiness. For example, being educated, or employed, or married also increased happiness. But all of these factors also interact with religion. If religious identity is lower in educated or employed people, then the net result is hard to predict.

What’s more, they found differences among the religions. While protestants and Buddhists were a happy bunch, Catholics, ‘Independent’ Christians and Muslims were less happy than average. Is this a function of their religion, or other cultural factors at work. There are, after all, more people with ‘no religion’ in societies where Protestantism or Buddhism prevail…

June 21, 2009
Christians have a strange affinity for Islamists - mortality salience and the response to islamic threats
Next Post

June 27, 2009 Why should government welfare mean less religion?
Recent Comments
0 | Leave a Comment
Browse Our Archives
get the latest from
Nonreligious
Sign up for our newsletter
POPULAR AT PATHEOS Nonreligious
1