Christians have a strange affinity for Islamists – mortality salience and the response to islamic threats June 21, 2009 Epiphenom

When you remind people that they’re going to die, it affects their thinking. There’s a whole field of study, Terror Management Theory, dedicated to it.

One of the things it does, so the theory goes, is trigger something called ‘cultural worldview defence’. It makes you cling to the values you are comfortable with.

It also tends to make people more religious, as Ara Norenzayan and Ian Hansen showed a couple of years ago.

Now they’re back with another study that looked at a related question: what effect does reminding people about death (they call it ‘mortality salience’) have on attitudes to foreign religions?

It could go two ways. The fear of foreigners could trigger hostility, but religious solidarity might over-ride that, even if it was a foreign religion. 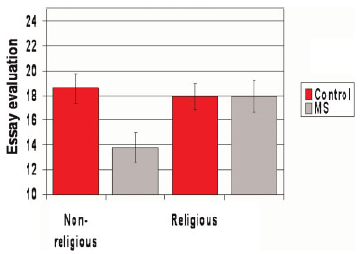 So what they did was to ask their Canadian test subjects, a mix of non-religious and religious (mostly Christian, none Muslim), to rate a virulently anti-western essay, allegedly by an Islamic visiting student. Prior to doing that, they were asked to think either about dying, or watching telly (the experimenters took pains to add in a bunch of other tasks, so the subjects didn’t guess what was going on).

In the control condition, where subjects were not made to think about death and so weren’t ‘mortality salient’, there was no difference between the reactions of religious and non-religious to the essay.

And when exposed to death thoughts, the result for the non-religious was as expected. Those who were ‘mortality salient’ became more hostile to the Islamic essay.

But that didn’t happen with the religious. Their attitude didn’t change (in some experiments, they actually warmed slightly to the islamist).

They ruled out a few potential explanations. It wasn’t anything to do with political opinions or self esteem, and the groups didn’t differ in their response to the death prompt. It wasn’t that the non-religious thought more about death as a result, for example.

According to Norenzayan and Hansen, what’s going on here is that two processes are working in opposition. The religious have the same ‘fear of foreigners’ response as the non-religious, but they also are sympathetic to the religious message.

In other words, fear of death makes Christians open to the idea of the imposition of religion onto society, even when the message is coming from a foreign religion.

In case you’re curious, here’s the essay they had to rate. You can see why Christians might be strangely attracted to it, because it has a lot of ideas in it that fit snugly with Christianity.

The problem with the Western world is the lack of faith. It is for that exact reason that the West will never triumph over the Islamic world. A person with faith is by definition a stronger person than one who has nothing to look up to beyond themselves. The West has a lot to offer economically to try to fill the void in people’s hearts, but ultimately will fall behind in a true cultural war against a culture that offers conviction, offers hope for something bigger than more money or empty pleasures. Religion in the west does not offer real comfort and a true path for their believers as they do in the nations of Islam, and the important values are neglected in the West and emphasized in the Islamic world.

History shows that cultures, which offered monetary and quality of (material) life advantages at the expense of true spiritual path, eventually fell before religious passion (e.g., Greece and Rome). And we all know that history repeats itself. The signs that the wheel is starting to turn are already around us.

June 18, 2009
Atheists also have a sense of awe and wonder
Next Post

June 24, 2009 The more government interferes with religion, the less satisfaction it brings you
Recent Comments
4 Comments | Leave a Comment
Browse Our Archives
get the latest from
Nonreligious
Sign up for our newsletter
POPULAR AT PATHEOS Nonreligious
1