Why do religious people have more friends?

Why do religious people have more friends? April 5, 2014 Epiphenom 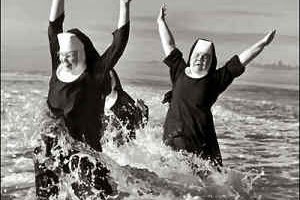 It’s a fairly well-attested fact that religious people tend to be happier, to be more socially engaged, and to have more social support. Well, there are nuances depending on the country you look at, but that’s the general picture.

But is it cause or effect? Is it that religion helps people to be socially engaged (by encouraging them to take part in community events, perhaps, or by making them feel part of a group), or is it that religion attracts a certain kind of person? There’s been a few studies into that in the past, and they’ve come up with mixed results.

He recruited 219 Australians (70% women, average 45 years) and asked them about their spirituality (questions like: “I believe in a universal power, a god”, “In the last 24 h, I have personally spent 30 min in prayer, meditation or contemplation,” and “I have a set of principles that govern my life”. It’s a bit more vague than your regular religion questionnaire, but it was chosen in order to pick up religiousness of all types and creeds, as well as to pick up on the importance of a shared world view in making social connections.

He asked them about their perceptions about the social support they got from friends, family and ‘others’, and also about their personality (specifically their agreeableness and conscientiousness).

What he found was that, after correcting for age, gender and education, their spirituality was a significant predictor of social support. However, he also found that conscientiousness and, especially, agreeableness, were also good predictors of social support.

In fact, personality was a better predictor of social support than spirituality. What’s more, when Schuurmans-Stekhoven put both factors into the model, the contribution of spirituality became insignificant.

What that suggests is that it’s personality, not spirituality, that explains why religious people have more social support. That conclusion is reinforced by Schuurmans-Stekhoven’s additional finding that many non-spiritual people were also highly conscientious and agreeable, and reported high levels of social support.

Now, Shuurmans-Stekhoven is quick to point out that this is just an observational analysis. That means the correlation could be spurious, or could be due to some other, unidentified factor. But his point is that most of the other studies done have exactly the same flaws (and worse). He’s tested the claim that spirituality leads to increased social support (based on correlations), and found it wanting.

Even so, what these results suggest is that spirituality, far from being a cause of sociability, actually attracts sociable people (or at least, a subset of them).

Schuurmans-Stekhoven, J. (2013). Spirit or Fleeting Apparition? Why Spirituality’s Link with Social Support Might Be Incrementally Invalid Journal of Religion and Health DOI: 10.1007/s10943-013-9801-3

April 18, 2014 Turning to God for reassurance in the face of wonder
Recent Comments
0 | Leave a Comment
Browse Our Archives
get the latest from
Nonreligious
Sign up for our newsletter
POPULAR AT PATHEOS Nonreligious
1