What does the latest research say on religion decreasing the risk of suicide?

July 6, 2014 by Epiphenom
0 Comments
What does the latest research say on religion decreasing the risk of suicide? July 6, 2014 Epiphenom

And so to this thorny subject again! This time with a batch of new studies – but what light do they shed on this complicated topic?

First up is a straightforward analysis of data from the Third National Health and Nutrition Examination Survey (NHANES III) in the USA (Evan Kleiman and Richard Liu at George Mason University, USA – all the refs are at the foot of this post). This survey asked people about their religious service attendance, and then followed them for up to 20 years, to see what became of them. 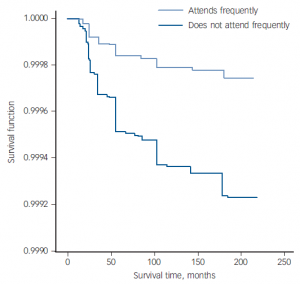 As you can see in the graphic, frequent attenders were significantly less likely to commit suicide. (You have to be a bit careful with that graph. It looks like most people committed suicide, until you look at the scale on the left hand side and realise that it’s only 0.08% even of the non-religious!)

But wait. What does it mean to say that you feel that your life has “an important purpose or meaning”? I don’t know many atheists who would feel that such a statement even makes sense. So perhaps that’s really just a surrogate for a certain kind of religious belief – which doesn’t take us very far.

One thing that characterises Western religion is the deep-seated prejudice against suicide. Is this the protective factor?

In Malaysia, a survey of 141 students by Foo et al found that, although religious commitment was not associated with suicidal behaviours, it was linked to rejection of suicide as an action. So more support for this idea (see Suicide, Age and Poison for another perspective).

One last study, this time from the Ukrainian city of Dnipropetrovsk. Vasiliy Usenko and colleagues found that after Orthodox Christian mass events (we’re talking here about one-off events, not your regular Christmas, East etc), suicidal behaviour and suicidal attempts dropped among women (men carried on at the same rate as before).

But something very different happened after ‘New Religious Movement’ events (the charismatic new Christian movements that are springing up in poor countries everywhere). After these, the risk of suicides, attempts, and behaviour actually increased for both men and women.

Now, this is not to dispute that alleviation of sadness and depression, that is sometimes linked to religious involvement, could contribute to reducing the risk of suicide. But clearly it also depends on what your religion says, and whether or not you are part of the mainstream.

Which may well explain why the link between suicide and religion is rather patchy worldwide.

June 11, 2014
Atheism not linked to cognitive decline (but it is linked to intelligence)
Next Post