Subliminal priming is a classic way to study how religion might affect attitudes and behaviour. But previous studies have had mixed results – sometimes it works, sometimes it doesn’t. In the last post, I described a study which found that using words to prime Muslims had little effect, but subtly playing the call to prayer did.

Maybe Muslims are different from Christians? Or maybe there is something fundamental being revealed here.

Take a look at some studies done recently by Sarah Cavrak & Heather Kleider-Offutt, at Georgia University in the USA. They looked at what happened when students were primed with religious, versus non-religious, symbols.

What they found was that graduates shown religious pictures were significantly faster at recognising religious words (they had words and letter strings flashed in front of them, and had to press a button when they recognised a word), regardless of their religious beliefs. 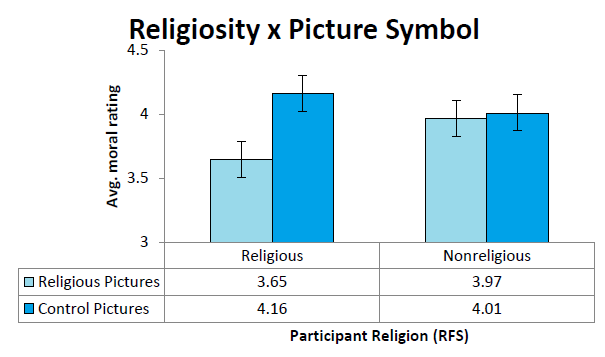 In the second study, undergrads were primed with religious or control pictures again, but this time had to rate the morality of a series of statements. When primed, the religious students rated the statements more harshly – they were more likely to rate statements as immoral.

Then they repeated the study using religious words as primes. This time there was an effect, but it seemed to be smaller. And what’s more, there was no difference in the effect between the religious and non-religious students.

These data support our hypothesis that religious icons simultaneously activate multiple aspects of religious life (including expectations of morality) which does not occur when a single word is shown, and that this knowledge is well known as they influenced both religious and nonreligious people.

So, the idea is that pictures have a deeper, broader impact than words. It’s an interesting idea, and would fit with the findings about the Muslim call to prayer.

But a word of caution. This was quite a small study, and there are many ways that it could have panned out (they measured religion in three different ways, for example, but only one of them was linked to different responses). So we may be seeing here just a chance effect.

But there’s something about the idea that makes sense. The religious experience is a deeply embedded cultural phenomenon. I’d like to see more priming studies using experiences, rather than words. 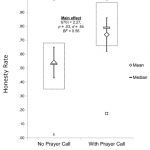 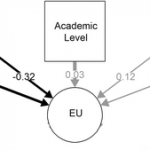 October 20, 2014 Religion matters more than education when it comes to creationist beliefs
Recent Comments
0 | Leave a Comment
Browse Our Archives
get the latest from
Nonreligious
Sign up for our newsletter
POPULAR AT PATHEOS Nonreligious
1