The statistics are clear: a cultural shift away from religion is underway in the USA

May 30, 2015 by Epiphenom
0 Comments
The statistics are clear: a cultural shift away from religion is underway in the USA May 30, 2015 Epiphenom

From time to time, we see surveys from the USA that suggest an increasing tide of non-affiliation to religion, especially among the young. Taken in isolation, it’s really hard to know what to make of them.

Maybe, for example, what we are seeing reflects religious apathy among the young. Maybe it’s simply that people believe just as strongly as ever – they just don’t identify with any particular religion.

Or maybe it reflects a fundamental shift in underlying cultural values.

In a massive new analysis looking at survey data from over 11 million young Americans, Jean Twenge (San Diego State University) and colleagues have teased out a clearer picture than ever of what is going on.

The data they used were from four surveys that have been run annually since 1976 – the ‘Monitoring the Future’ program has surveyed 8th, 10th and 12th graders, while the American Freshman Survey polled first-year university students.

What they found was a clear picture not only of declining religious affiliation, but also of declining interest in religion altogether. 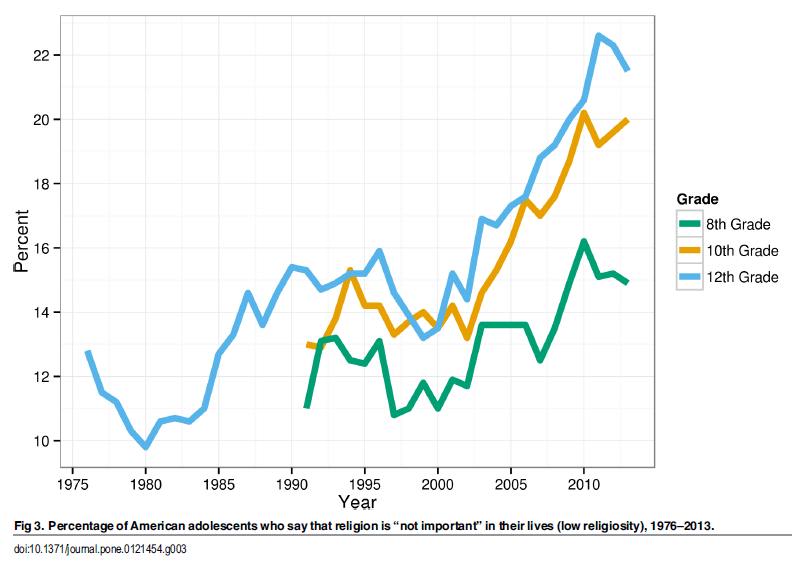 As you can see in the graphic, students are increasingly saying that religion is simply unimportant in their lives. This increase has been particularly strong in the last 10 years.

What you can see also is that older students are less religious than younger ones. As students move out from the parental home, they increasingly are dropping the religious beliefs of their parents.

These days, 21% of 12th-graders and 27% of freshman say they never attend religious services – up by more than double since the 1970s. There have been similar, although smaller, increases among 8th and 12-graders.

There’s a similar picture for religious affiliation, and what’s particularly interesting here is that although parents also increasingly have no affiliation, the increase has been much greater for students. The result is an increasing gap – now a full 10% of students with no affiliation come from religious homes.

These changing personal beliefs are also reflected in attitudes towards religion.

Although these trends were pretty much across the board, they were particularly strong among the poor and among girls – both groups who were more religious to start with. But it was also stronger among Whites than among blacks, and in the Northeast than in the Midwest or South.

So what’s driving these changes? A key factor is the rise in individualism.

What they found was that these changes went hand in hand with an increase in self-confidence and drive to achieve.

What’s more, the loss of religion was greater in years with higher income, higher materialism (i.e. the value placed on having lots of money), and less social support. All of these are factors that are linked to greater individualism.

Strangely, they also found that the rise in income inequality was strongly linked to loss of religion. Strange because that’s the exact opposite of what international research has found – but perhaps rising inequality in the US is another facet of the increase of individualism.

When I started this blog back in 2008 the accepted wisdom was that the USA was an exception among wealthy nations. For some reason the population of the USA was highly religious, whereas other countries had secularized. Much brainpower and research effort by social scientists wen into trying to explain this discrepancy.

But these new data suggest that the discrepancy was just a temporary blip. People who would like to believe that massive secularization is not underway apply the same arguments that were voiced 20 years ago in Europe.

These young people are just a bit rebellious, it is said, and they will return to religion as they get older (not in Europe they haven’t). As these data show, what we’re seeing is a cultural change – which is particularly clear when you put it together with other data showing that the USA is becoming progressively secularised.

Alternatively, it’s claimed that Millenials are still religious, they just don’t affiliate with religion . But these new data show that, as in Europe, what we’re seeing is a rising tide of ‘Don’t cares’ – people who may claim some kind of belief if pressed, but for whom religion is simply unimportant in their daily lives.

Perhaps the USA is more similar to other wealthy nations than we suspected, and maybe we can look there to see what the future might hold for the states. That is the topic for the next blog post, in which I’ll be covering some groundbreaking new research into how and why patterns of church attendance are changing worldwide.