Research over the past few years has shown that many people intuitively think that things in the natural world exist for some ulterior purpose – almost as if they had been designed that way. We have a tendency to agree with statements such as ‘water condenses to moisten the air’, or ‘the sun shines in order to keep us warm’. 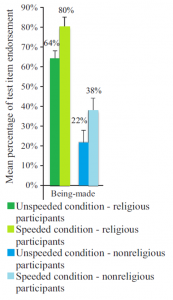 A moments thought will tell you that these statements are wrong. But put people – even scientists – under time pressure, and they tend to agree with them.

But there are quite a few uncertainties about what’s actually going on here. Do people really think these things are made like that by a designer? And are atheists less likely to get it wrong?

Elisa Järnefelt (University of Helsinki, Finland), together with Caitlin Canfield and Deborah Kelemen (Boston University, USA) did a few studies to find out. What marks these research apart from previous studies is the lengths they went to to control for all the possible criticisms and alternative explanations.

The basic approach was to show pictures of natural things (such as a giraffe, maple tree, tiger’s paw, mountain, stalagmite, or hurricanes) to their subjects and ask them whether “any being purposefully made the thing in the picture”. Then they did it again, but this time putting their subjects under time pressure – maximum of 865 milliseconds to make up your mind – and ratcheted up the pressure by throwing in some cartoon animals.

What they found, in their group of 352 North American adults they recruited through Amazon’s Mechanical Turk, was that religious people (green bars in the graphic) were much more likely to say that natural items had a designer than were non-religious people (blue bars).

When they put their subjects under time pressure, both groups – religious and non-religious – were more likely to say that the natural items had a designer.

That’s despite the fact that they found the non-religious subjects were using a deliberate strategy of trying to to say the ‘right’ thing. They tended to say that cartoon animals, as well as real ones, do not have a designer. That suggests their tendency to say natural objects were not designed was in part due to them deliberately overriding their instincts to reject out-of-hand the notion of design.

They ran the study again, but this time with self-declared atheists, and got similar results.

Perhaps the problems come from being brought up in a religious environment? So they did the study again, this time in Finland – a country where most people are not religious and many are atheists. They got the same results.

These data strongly support the idea that humans have a natural tendency to see the natural world as having a designer.

Even more strikingly, they suggest that atheists are not naturally immune to these intuitions. Rather, they  teach themselves to actively overcome them!

September 30, 2015
Your good deeds are pleasing God? That might impress kids but it doesn't impress adults!
Next Post

October 22, 2015 The God-serving bias: thank God if you live, but don't blame God if you die
Recent Comments
0 | Leave a Comment
Browse Our Archives
Related posts from Epiphenom