One of the issues that’s come out of the current discussion over best practices in fighting human trafficking has revolved around proselytizing.

Shortly, we’ll publish part one of our interview with Claude d’Estrée, Buddhist Chaplain at the University of Denver and head of the Human Trafficking Clinic. Prompted by a UN conference, he and colleagues were asked to come up with a Code of Conduct for organizations doing anti-human trafficking work. He co-authored it with Yvonne Zimmerman, whose interview on this blog launched a discussion about the ethics of anti-trafficking efforts. As a little preview of the interview, here’s what Claude had to say about it:

Erik Campano: How have groups you have observed as proselytizing reacted to your Code of Conduct?

Claude d’Estrée: [laughing] Not well. I should have predicted this, right? Which is to say: the religious groups and organizations which don’t do this have no problem with it. But the ones that are violating it have strong disagreement on many different layers. Not the least of which is to say that secular forms of therapy are providing a form of normative values no different than if it is Christian based.

OK, so Claude d’Estrée is referring to guideline #5 of 5, of his proposed Code of Conduct:

Let’s just focus on #5 here. What d’Estrée is saying is that what is commonly called “Christian counseling” can’t replace traditional psychotherapy, psychiatry, social work counseling, and so forth. But (and we get into this in the interview), often, Christian counseling is offered to “victims” (or potential “victims”) (I’m using scare quotes because that word is currently in dispute; consider them included for the rest of this post). What frightens some observers concerned with human rights is that the psychotherapeutic process could be used as a way to impose Christian symbols and language onto people who don’t come from Christian cultures. That in trying to make broken, vulnerable human trafficking victims whole again, religious NGOs manipulate their psychology so that they start believing and behaving like Christians. Would (or would not) that come pretty close to violating the UN’s decree that freedom of religion and belief is a human right?

On the other hand, if you asked certain Christians, they’d say that you’re only whole when, for example, you’ve accepted Christ as your savior. Which, might, of course, create a cognitive dissonance in the part of the NGO worker, who, on one hand, wants to respect human rights, but on the other hand, believes in the universality of his religious belief — and the importance of spreading it.

The solution of d’Estrée and his colleagues is to require the NGO to refer the victim out to a separate organization, so there’s no conflict of interest between the rescuer and the therapist. That, of course, comes with its own major challenge: actually getting the funding to have secular, normative psychotherapists available to help counsel rescued victims. When you’re on the ground (as d’Estrée has been, many times), working with real, suffering people, it’s a lot harder to make these distinctions or know what to do in emergency situations.

Evangelism in anti-human trafficking, according to d’Estrée, is separate from proseltyzing, in that during evangelism the victim initiates the interest in exploring the religious tradition. There’s no quid-pro-quo: I’ll follow your religion because you rescued me from a brothel.

How do you distinguish evangelism from proselytizing? Are either acceptable in anti-trafficking efforts? Is the #5 standard fair? Realistic? 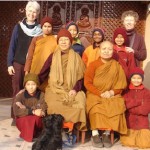 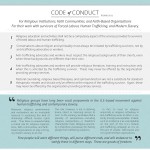