I Used To Be a Minister

Patheos Explore the world's faith through different perspectives on religion and spirituality! Patheos has the views of the prevalent religions and spiritualities of the world.
I used to a be a Minister. I served in a ministry position for 12 years. For about 259 reasons I walked away from it, which was healthy & necessary at the time. Intuitively, I knew the storm brewing in my heart and life was bigger than I could handle. Also, I was one half of a crumbling, toxic marriage. As the nightmares of life grew I went on to have a breakdown of sorts including but not limited to PSTD, depression and spectacular moral failures of epic proportions. The marriage disintegrated into a million little ugly pieces, followed by a traumatic divorce & an equally traumatic custody battle where I genuinely feared I would lose my children. During that time, I lost my job, every penny I had, I was *nearly* homeless, slightly suicidal and spent a week in rehab followed by months in Anonymous meetings. I threw away a lot. I ran from a lot. I lost a lot. I hurt a lot. I was hurting. Deeply, deeply hurting.

When I’ve casually thrown around the phrase “I put a blowtorch to my life,” I have not exaggerated. I found myself vague-booking to spare both the reader & myself the immense shame of a somewhat public fall from glory. I went from being everyone’s favorite this-and-that, up-and-coming-this & look-out-for-her-that to the absolute rock bottom. I became not just the rock at the bottom, but the mold that grows on the bottom of the rock that lives at Rock Bottom. Of that time, I don’t even want to know all the things that were said of me. There are friends who I assumed would love me all the way through who essentially said, “your too messy,” & “I’m scared of you.” I lost many communities & many friends. As an aside, if one is ever tempted towards jealousy at my redemption story, one should rethink the whole notion. I wouldn’t wish my trek through hell and back on anyone. Even redemption stories are bathed in the refiner’s fire.

Of the many, many consequences of that perfect storm is that I stopped sharing how my faith directly coincides with my passions. My passion for justice issues, racial reconciliation, anti-racism and my work to be an active voice and participant in dismantling white supremacy and systemic racist practices (police brutality, etc.) in the judicial system were all disconnected from my faith. My thoughts went this way: who on earth wants to hear me talk about my faith or God? Regardless of content, is there a place for me to wed those issues?

In light of my past, my current or even my future I knew I simply did not have the same voice I once had. I did not and do not have the leadership I once had, nor have I had the platform and that needed to be okay.  And it was okay. And it has been okay. I took a seat.

I took a damn seat.

I needed all of the time I took to reflect and mourn. Honestly, I could have had done with more. I still mourn in many ways, which is also okay and appropriate. What a lot of people don’t understand about everything I’ve been through is this: everything I did, everything I’ve done and everything I now do was and is so that I could survive. I’m trying to survive something I’ve never known with 100% certainty that I’m supposed to. If you’ve ever done something(s) risky or wrong in the name of desperation, or white-knuckled your way through addiction or fear and made many survival-based choices one-after-another, then you understand a bit of what my life has felt like. A series of break-neck survival-based choices.  And when you reach that point, passions and hobbies seem woefully superfluous to say the least.

But then a few months ago, a distant acquaintance randomly reached out to me with words from the Lord regarding my silence. Of the many items we spoke of, she told me it was time to start using my voice again. I have never been unwilling, but I have been afraid. Deeply, deathly, shamefully, woefully afraid because again, read the first paragraph. Also, I have sensed timing is important. In the meantime, I have not been silent on my passions nor my fierce, mother-bear instincts towards my people, I’ve just not connected those passions to my faith. I’ve not connected them to my deeply held belief that God is a God of justice, that God is the God of African-American peoples or that our vulnerabilities -all of them- from police brutality to poverty and everything in between also cause our God to mourn.

Then a few weeks ago happened. Several shootings. Murdered police men, protests across the country, racial unrest and Donald Trump for crying out loud. All of this has lit a fire under my soul, which fuels what Pastor Bill Hybels speaks of as “holy discontent,” the area in which God has so emboldened and gifted you to care about which produces a sense of unquenchable anger or discontent if nothing changes. When it comes to my people, I’ve felt this holy discontent since I was 13. Perhaps younger. Even more, I felt called to it. Yes, called. In the exact way that Christians use that word to describe what we are supposed to give our life. to.

In the midst of all that, an invitation and an acceptance to write here at Patheos, for the Progressive Christian channel on matters that matter to black folks. But also on everyday matters of randomness. But also on the ins and the outs of every single day lived as a black woman.

I’ll be trying to write a couple of times a week at least. And I’m giving myself permission to write differently than I ever have, short or long, serious or silly. I need to begin to see past  “just surviving.” I have a feeling I’ll always right about survival & hope. That is the recurring theme of my past decade of written work as it is, but I’d also like to explore LIVING. Perhaps even *gasp* thriving. 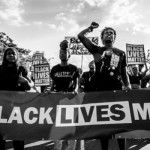