DANCE DANCE REVOLUTION: So due to one of the snafus with which freelance life is riddled, this review of Tom Stoppard’s Rock’n’Roll didn’t get placed in a timely fashion. I’ve decided to post it even though the show closed a while ago, because I think it may interest some of you all. I vacillated on whether or not to include the bits specific to this production, but ended up keeping them in, since this was not only the best Stoppard I’ve seen by far but the best Studio Theatre production I’ve seen by far. I want you guys to know that they can really knock it out of the park.

Into this reverse-ostrakon of historical popularity, Tom Stoppard has thrown an unexpected name: the Great God Pan.

His play Rock ’n’ Roll, in an intimate production at Washington, D.C.’s Studio Theatre through June 21, dramatizes the clash between the “cultural Left” and the more strictly political Left in the last half of the Cold War. Yet all the play’s oppositions–culture vs. politics, eros vs. reason, soul vs. matter–are embodied in the complex relationships between finely-drawn, resonant characters. The sentimentality which sometimes mars Stoppard’s work is absent. It’s a comedy, and a love song, but its joys and reconciliations are hard-won.

Studio’s actors are completely engaging, and the small theater space makes everything immediate: You can smell the joss-sticks. It is weird sitting quietly, occasionally clapping, as the actors explore the ecstatic release of a great guitar riff. There’s no way around that, given the bourgeois nature of just about any American audience who would come to see a Stoppard play. But the play is good enough to overcome our habitual complacence.

The first scene presents Great Pan in the unlikely form of Syd Barrett, crouching on a stoned hippie teen girl’s garden wall. We then set up the tension which will define the play: It is 1968 and Soviet tanks are rolling into Prague. In Cambridge, half-feral British Communist Max is growling at half-dissident Czech Jan, as Jan decamps for home: “I said, ‘You. I’ll take you,’ because you were serious and you knew your Marx… and at the first flutter of a Czech flag you cut and run like an old woman still in love with Masaryk.” Max does offer the self-consciously ironic machismo of apologizing to Jan “about the tanks.”

Max is a bitter-ender: “Why do people go on as if there’s a danger we might forget Communism’s crimes, when the danger is we’ll forget its achievements?” He feels piercingly the humiliation of his position:

I meet some apparatchik working the system, and he’s fascinated by me. He’s never met a Communist before. I’m like the last white rhino.

(One of the many subtle touches in this play is the way Max’s rationalism lands him in cruelly absurd situations.) His materialism gives no quarter to fuzzy-headed talk of “inspiration” or “soul”: The meat is all there is. This belief gets one of the funniest smackdowns in a very funny play, when his wife’s student Lenka says he believes a human is a “pinball machine which thinks it’s in love.” But Max also gets one of the play’s most wrenching lines, after his wife accuses him and his materialism of collaboration with the cancer which is killing her.

Max is the sort of man who says, “A worker’s state fits the case. What else but work lifts us out of the slime? Work does all the work.” Max’s marriage lasts until his wife’s death. He’s the Communist bourgeois.

Jan, meanwhile, just wants to listen to his records. His return to Czechoslovakia is something of a road-not-taken for Stoppard: As the playwright explains, “He was born where I was born, in Zlin, and left Czechoslovakia for the same reason (Hitler) at much the same time. But Jan came directly to England as a baby, and returned to Czechoslovakia in 1948, two years after I arrived in England having spent the war years in the Far East.” Back behind the Iron Curtain, Jan spends his time playing rock music, maneuvering around the police, and arguing against politics. The cops force all his employers to fire him, then arrest him for being a “parasite”–in a pointed callback to an earlier scene in which Jan praised British freedoms, and Max snapped that in England “everyone’s free to have lunch at the Ritz and it’s absolutely legal to be unemployed.”

Here again materialism matters, though the play doesn’t hammer it home. A cop can hit you in the face. A cop can bash in your head. A cop can control the meat. If, as the anti-Nazi resistance song says, “Thoughts are free,” it is only because there is something irreducible, a soul which can’t be destroyed by hitting it.

This is part of the importance of the recurring pagan metaphors. As Eleanor, Max’s wife, translates Sappho for a student: “Eros is amachanon, he’s spirit as opposed to machinery, Sappho is making the distinction. He’s not naughty, he’s–what? Uncontrollable. Uncageable.”

At first Jan and Ferdinand are sharply opposed in their ways of existing under totalitarianism. Jan accuses Ferdinand of “moral exhibitionism” for his constant petitions and protests. Jan argues that his rock musicians–preeminently the Czech band, the Plastic People of the Universe–have found a deeper form of rebellion against tyranny:

FERDINAND: Who’s got the best chance of getting Husak’s attention–Havel or the Plastic People of the Universe?
JAN: The Plastics.

At first Ferdinand is exasperated. After he meets the Plastics’ impresario in prison, however, he comes to Jan with convert’s fervor:

FERDINAND: He explained about the hair. The tempter says, “Cut your hair just a little, and we’ll let you play.” Then the tempter says, “Just change the name of the band and you can play.” And after that, “Just leave out this one song”…. It is better not to start by cutting your hair, Jirous said–no, it is necessary. Then nothing you do can possibly give support to the idea that everything is in order in this country. Why couldn’t you have explained this?

This play is passionate about the transformative power of music–the moral force of joy. But it is not naïve. Stoppard hints that perhaps rock’s transformative power is not the same in the liberated West as in the repressed Eastern Bloc: Although Jan’s line, fairly early in the play that “the Grateful Dead must be so envious of the Plastics” gets a laugh, by the play’s end the primary representative of Western rock is the aging Syd Barrett, shambling through the eternal present of late-stage drug addiction. And one of the sharpest exchanges in the play is this one, toward the very end:

MAX: There was a place once, a huge country where square-jawed workers swung sledgehammers, and smiling buxom girls with kerchiefs on their heads lifted sheaves of wheat, and there was a lot of singing, and volumes of poetry in editions of a hundred thousand sold out in a day…. What happened to it?
JAN: If pornography was available, the poetry would have sold like poetry in the West.

The last time the gods are mentioned, Lenka is in Cambridge, as a student of her own reads from Plutarch: “…and Thamous in the stern shouted towards the shore–Great Pan is dead!” The play ends in the Czech Republic, because it has to, because the joy of liberation depends on who’s liberated from what. It’s possible to read the play’s gentle ending as a statement that the time of the gods has passed, and we are now in a time of humanity. But even this is a much too reductive reading of a play which is, like the ecstatic soul, irreducible.

July 14, 2009
Browse Our Archives
get the latest updates from
Eve Tushnet
and the Patheos
Catholic
Channel
POPULAR AT PATHEOS Catholic
1 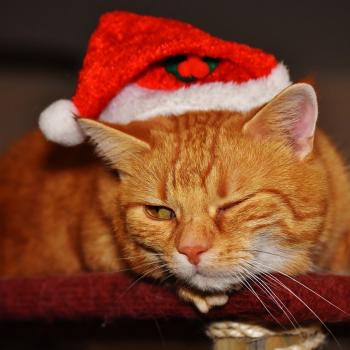 Catholic
"The Violence of Reason": I review a retrospective...
Eve Tushnet
TRENDING AT PATHEOS Catholic