The Searchers: I revisit “ElfQuest”

This winter I’ve had the true pleasure of revisiting a comics series I adored in childhood, Wendy and Richard Pini’s ElfQuest. It is about elves on a quest (more than one quest! so many quests!) and although it is marked in some bad ways by its late ’70s – early ’80s origin, it is an artistic triumph and a genuine delight. It’s also, it turns out, full of themes which would continue to shape my life up through my conversion and current work. Man, I love this so, so much. This post is about the first four volumes of the graphic novel–after that I enjoy the art and story less, or at least I did the last time I re-read, which might have been in high school. I might revisit those later volumes eventually.

The first thing to say is that ElfQuest is fabulous comics. Wendy Pini’s design for the elves is just a shade on the cute side for my adult tastes–they’re a little too neotenous and compact–but her easy command of the basic building blocks of comics, the panel and the page layout, is stunning. She’s great with time-compression or -expansion (the control of your experience of time is one of comics’ unique features as a medium). She can use the shape of panels to convey emotion and express symbolic linkages between one event or character and another; she can create splash pages whose images flow or punch.

The little details are gorgeous to look at–all the flowing cloth, the lush ’80s hair, the flickering firelight (her lighting is so good!), the deep jewel-tone shadows. The colors are so rich, and each book and location has its own palette. There are so many iconic images here: Rayek on the Bridge of Destiny, the group portrait of Nonna and Adar’s tribe, Lord Voll meeting the children, Redlance making his staff sprout thorns. I will say that the action scenes don’t always work with physics (hey man, maybe the World of Two Moons has different gravity, you don’t know!), and in early books can also get a bit muddled. But overall this is so great to look at and read.

The story starts when humans, believing the elves to be demons, burn down the forest where Cutter and his tribe of wolf-riding elves live. (Yes, this is the origin of my lifelong love of wolves.) The elves flee into the caverns of the trolls, where they’re tricked into entering the “Tunnel of Golden Light”–which leads them to a vast and deadly desert. So their first quest is simply for a home, a place where they can survive on the bare-bones terms they’re used to, a place where “sorrows end.” What they find is that their world is much larger than they realized; that there are other elves with very different cultures, though all share a mysterious common ancestry. The Quest of the title turns out to be the quest for answers: Where did we come from? And, eventually, it is the quest for their homeplace, the “Palace of the High Ones,” where all elves came from–a place none of the Wolfriders have ever seen, but which draws them, as they long for it with greater intensity the closer they get.

So, themes. I’ll only talk about the themes which especially resonated with me, since this is my blog, but there’s lots more here, about violence; acceptance of death; making peace; cultural conflict and the way assumptions about other cultures become self-fulfilling prophecies; and the insistent, inescapable reality and limits of the body.

# friendship. Like most of these themes, this reaches its crescendo in Book Four, when the story of the elves’ first war is told largely through two friendships, between the Wolfriders’ chief Cutter and his best friend Skywise, and between the brash Rayek and his mentor/charge Ekuar.

ElfQuest has a lot of romance and storylines involving sexual union. The elves have a thing called “Recognition,” which is basically like, What if you just straight up couldn’t resist sexual desire for a specific person, who has an equally strong need for you, and you had no choice but to join with them sexually regardless of your plans, beliefs, or hopes? Recognition unites disparate bands of elves and produces magically-powerful children. It’s also creepy, the kind of narrative device you get in a culture which does on some level believe that the sex drive is almighty but knows how destructive that belief can be. It’s an attempt to marry the wildness of eros, and our helplessness before this cruel god, with the respect and basic ethics implied in a worldview where sex is ordered, mutual, and fruitful. It’s wishful thinking, is what I’m saying, although I’m also saying it’s very fun to read.

I love a lot of these ElfQuest couples: Fierce Nightfall offering gentle Redlance a masculinity in which he is “the flower, the tree, the vine”; Cutter and Leetah going from romance-novel “I hate you, don’t leave!” stuff to the kind of humbled marital love which can embrace and comfort a repentant spouse; Dewshine and Tyldak, seeing the true form hidden in one another’s flesh; Moonshade and Strongbow, stoic guardians of the “Way,” of whom more in a moment. But I also love that both Book Two and Book Four are so centrally stories of friendship. One of the marks of Recognition is that you know the other elf’s “soul name,” the secret syllable which sums up everything they are. And at one point Leetah gasps Cutter’s soul name out loud in front of Skywise, then apologizes in horror for revealing something outsiders shouldn’t know. Cutter replies that Skywise has known his soul name for a long time. Their sacrifices for and tenderness with one another are the marks of love. Meanwhile love of Ekuar is what finally teaches Rayek humility–it’s through love of his friend that he grows up, which romantic love very much failed to do for him.

The one criticism I’ll make here is that there’s no deep friendship between women. I would’ve loved to see Nightfall and Moonshade, for example, living out a devoted friendship which survives all their clashes about “the Way” and the changes Cutter brings. Or Nightfall and Leetah: Nightfall is Leetah’s ally from their first meeting, but we never really see their relationship on the page.

# “the Way.” This is what Wolfriders call their way of life–their practices, which are the source of their ethic. In Book Three they start to realize that Cutter’s quest will change the Way. And the path ahead is suddenly uncertain. I love how the Pinis portray en ethic which is inseparable from practice; and I love how much respect they give the conservative ethos, Strongbow’s ferocious protectiveness of the Way. Of course, as soon as you have an articulated conservatism, the tradition has already been relativized. The emergence of conservatism is itself a form of change. And the Pinis present that fact simply as something everyone has to grapple with, not as a knockdown argument against the conservative instinct.

# leadership, loyalty, submission. Most elves are short. Their ancestors, the High Ones, were in fact literally much taller. When Cutter meets one of the early descendants of the High Ones, an immensely aged elf named Savah, she rises and he sees how much taller she is. And in awe he kneels–makes himself even smaller in comparison to her majesty.

There’s a lot in ElfQuest about the nature of leadership, and also the much more neglected subject of followership. At first, Cutter commands his tribe’s loyalty because that is the Way. And there’s a necessary truth there: Sustained leadership needs structure, as erotic love needs marriage it needs an institution which is more than personal so that duty can take over when personal loyalty fails. When Cutter does have to earn his followers, it becomes clear that followership is a form of trust. ElfQuest honors the obedience Cutter’s tribe gives their chief. We see not only the doubts and choices of leadership, which lots of narratives will give you, but the beauty of followership.

# longing for a home you’ve never seen. I am pretty sure the Pinis were not intending to make some kind of Eden allegory, and there are many elements of the story which wouldn’t fit that parallel. But the overwhelming longing of the elves, and the rapture on their faces when they first see a vision of the Palace of the High Ones, seems to me an image of what Augustine means when he says we have a memory of Adam’s happiness. 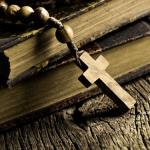 December 14, 2017
"How the Eucharist Helps the Lonely and the Desperate": I'm in the Catholic Herald
Next Post

December 18, 2017 Seeking to Interview Gay/Same-sex Attracted/You Know What I Mean People About Learning to Experience God's Tenderness
Browse Our Archives
get the latest from
Eve Tushnet
Sign up for our newsletter
POPULAR AT PATHEOS Catholic
1