Legitimate Adventures: Quick Notes on Colin Ward’s “The Child in the City”

Just finished this excellent 1978 manifesto about contemporary cities’ hostility to children, and I think a lot of people who read my stuff (esp policy wonk types and parents) would love it. Its central points include things like: # Every neglected space will be discovered and used by children. The dangerous, hidden activities of childhood are often the ones we remember most fondly and learn from the most–maybe because they’re the activities in which we exercise the most complete responsibility. Burnt-out houses and bomb sites are places where children learn and play, and if adults want them to learn and play somewhere marginally less tetanus-y, we need to provide opportunities for secrets, risks, and above all responsibilities.

# Kids love work and responsibility, and will find ways to get these things illicitly if you don’t provide any licit avenues. Kids love to take ownership of spaces. They’ll do that through vandalism if you don’t let them do it through caretaking. Kids love earning money. When we shut kids out of the adult worlds of work and care, we not only make it harder for them to take on responsibility later; we also leave them bored and delinquent.

# Cars have crowded out the street play and street life in which children, adolescents, adults, and elders used to mingle more freely. Some of the photographs are esp striking here, the 1910s scenes which are all about people in the street and the 1970s shots of the same area, now dominated by cars. The open street is particularly important for poorer people who have much less living space.

These points and many more are fleshed out with evocative quotations from grown-up city kids’ memoirs, and with positive and negative contemporary examples. Ward is a crisp writer, passionate but not overwrought, and he does this great punchy thing of ending each short chapter as soon as he’s finished his ideas: Each chapter closes with a snap instead of a careful didactic conclusion. The photographs are brilliant. Perfect shots of idle, truculent, hardworking children: hanging upside-down, hitching a ride on the back of a tram, leading a horse; sleeping in the street, or running a Hungarian children’s railway.

This is a hopeful book, nuanced and lively. It shows us the world of childhood, where anarchic play and careful work respect no boundary. 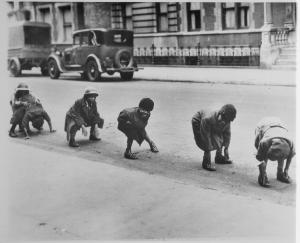 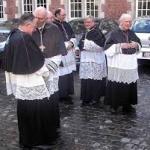 May 15, 2018
Catherine Addington on the Limited Imagination of the Met Gala
Next Post

May 30, 2018 This July, Come to the Big Gay Christian Extravaganza!
Browse Our Archives
Related posts from Eve Tushnet

Catholic
A New Extra-Millennial Book About Friendship as a...
Eve Tushnet
TRENDING AT PATHEOS Catholic