The Killer Inside Me: Short reviews from the AFI Spooky Movie Fest

The Killer Inside Me: Short reviews from the AFI Spooky Movie Fest October 10, 2018 Eve Tushnet

I’m saving the best film I saw at the fest for a full review, in case you’re wondering why all of these are so ambivalent. In the order I saw them:

The Ranger: ’80s-set (I think) slasher homage about a deranged park ranger (Jeremy Holm) murdering his way through a gang of horrible punks because of his obsession with their least self-absorbed member (Chloe Levine). This is mostly very fun, silly but satisfying. Levine gives depth to our heroine; the other punks’ actors all do well with much shallower roles, so I believed I was watching real people during a shallow period in their lives. You feel that they’ll look back with a mix of nostalgia and shame on their wasted youth–if they survive. Holm knows how to shiver perfectly on the edge of upright and scary, with just a hint of slime. Nice, nice work. Great music; very fun and well-shot woodsy visuals; almost too much gore for me–which is probably just the right amount of gore; and a perfect, wiggy final image.

Two aspects didn’t work for me. The one I’m definitely willing to name as a flaw is that the ranger has too many motives, and they conflict with one another. Is he a sex pest, is he a regulations-obsessed lawman (ORDER IS CHAOS!!!!), or is he a Man With the Wolf Inside, who believes we all have to get in touch with our inner carnivore? He cannot be both of the last two things! He shouldn’t be all three things. Pick one or, since this is ’80s slasher homage and those films were bats crazy, pick two, but don’t pick the two that directly conflict. Come on now.

The second thing is that these punks seem to live in a gentle world, in which the murderous park ranger is an anomaly. Only the heroine has a backstory with the kind of abandonment and tragedy you find in the life stories of so many people who actually become drug-addicted punk rockers, you know? Two of the punks are an interracial gay couple. They’re cute, I enjoyed them, but they are treated exactly like everybody else by their friends, and that I did not believe. Give us a harder story where the real violence, fears, and hatreds of the 1980s–and the real suffering with which our world has been suffused since the exit from Eden–continue to warp even those who think they’ve checked out of society.

The one moment where we do see that happen is when the heroine rebukes her friends for messing up the woods, and they all react like, “Oh lol how cute, the little lady is angry!” I liked that right after that confrontation we get (I think) the film’s first punk song with a woman singer. There’s subtlety there but also rawness, a real anger in the filmmaking which gives weight to the movie’s final choice, what it wants its heroine to be.

You Might Be the Killer: Another ’80s slasher homage. I never really thought this trend was a good idea–it’s too easy for the nostalgia humor, the “MST3K but not as clever” humor, to become an excuse not to make a good movie. You Might Be the Killer is especially disappointing because its setup has so much potential for real emotional punch. It could be The Final Girls; instead it’s, idk, Scream 7 or something. This was very much a minority opinion at the screening I attended, but I gotta do me.

And you’ll see why I wanted more when I tell you the idea behind the movie: A guy (Fran Kranz) calls his slasher-knowledgeable BFF (Alyson Hannigan) to beg for her help, because a killer is stalking the counselors at the summer camp where he works. Slowly it emerges that he himself is the killer, even though he doesn’t remember it. In the midst of his grief and guilt he has to decide whether he’ll try to survive, or accept the death that comes (temporarily, anyway) to all masked movie murderers.

Have you ever woken up with a really, really bad hangover? The kind where you’re pretty sure you did something awful, where you’re piecing together clues from the wreckage scattered around you and the messages on your voicemail? Have you ever had people tell you that you did something appalling, and you’ve had to try to convey that you are just as horrified by your behavior as they are but you really don’t remember it?

Yeah. If you made me a horror-comedy about that, if you dug real deep into that awful feeling and its relentless consequences, I’d wrap myself around your movie like an octopus made of guilty love.

Instead we get a slight movie where the cutesy touches (the recurring count of “dead counselors”) undercut the potential reckoning with reality, and where nobody seems to feel anything very deeply. The worst part is this: Okay, so the killer kills because he picked up and wore a possessed wooden mask–a mask which he knew was possessed, because it’s a family legend. If you want a blunt metaphor for substance abuse–a family legacy of becoming a terrible person due to your choice to interact with a material object!–you can hardly do better. And obviously everybody asks the guy, Why on earth did you put the mask on?! This is also a familiar reaction and a thing lots of Us (for certain humiliated values of “us”) have asked ourselves.

But he didn’t!!! He didn’t ever choose to put the mask on at any point. It was forced onto his face by, get this hot garbage, an evil seductress. Thanks that’s cool, you could have made a movie about the genuine tragedy of a man realizing he’s become an abuser (you could have made a comedy about that!), and instead you totally made a movie about how a man’s violence is a woman’s fault.

A Field Guide to Evil: Fun anthology of international horror shorts. Gorgeous opening credits, great spooky music, unsurprisingly-uneven films. I think the decision to start each one with an opening “entry” from the titular field guide was a mistake, since it pushed some shorts in a didactic and moralizing direction (especially the first one) and in general felt like unnecessary hand-holding. There’s a cool black & white short with a strong “Indian Lovecraft” flavor, and a deeply weird Greek tale of a demon who walks among men, which includes a seriously disturbing parody-Eucharist.

The first film is beautifully-shot but its underlying (or overlying–I don’t get the impression that the filmmakers valued subtlety) message is that Christianity is evil. That would be more persuasive if the specific situation depicted felt more grounded in historical reality: Maybe I’m wrong and this totally happened, but I don’t think medieval Austrians would have considered two women kissing on the lips to be sinful. Premodern same-sex kissing in general, and women’s same-sex physical intimacy specifically, rarely had the sexual connotations we’d see today. Anyway, obviously small Christian communities have frequently oppressed women (hey here’s a horror story for you), but it’s hard to believe in that story when it begins with something that feels so off-base and so colored by modern obsessions and prejudices.

Slice: Pleasant, slight horror-comedy about a small city where the local ghost population basically functions as an oppressed minority. Bright colors, cool clothes; a great setting (a pizza-delivery company where the drivers greet nervous late-night customers with the brilliant motto, “Relax! It’s Perfect Pizza”) which allows a lot of genuine working-class warmth and solidarity; some very 2018 (intentionally-)disingenuous rhetoric about the evils of capitalism; no actual point (which is fine), and a resolution that happens much too quickly and easily.

I guess I did want it to have a point or theme or something, just so that I would feel that loose ends had been wrapped up in some way. Still, this was an enjoyable choice for the end of the fest, and will likely be remembered as the kind of low-impact, time-stamped pleasure you hit up on a streaming service when you’ve had a long day and want to curl up with a cup of cocoa and watch some people get slaughtered: better than The Howling V (which I enjoyed, no judgment), about on the same level as C.H.U.D. 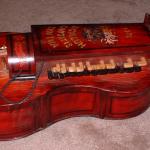 October 10, 2018 Sleuthing Is the Best Therapy: Dorothy Gilman, "The Tightrope Walker"
Browse Our Archives
get the latest updates from
Eve Tushnet
and the Patheos
Catholic
Channel
POPULAR AT PATHEOS Catholic
1

On the Patriot Front's Appearance at...
Steel Magnificat
Related posts from Eve Tushnet