at the Catholic Herald:

In 1985, two historians traveled through Turkey and the Middle East together. Robin Darling Young and Susan Ashbrook Harvey started the trip as friends; they came home as sisters.

Their bond of spiritual sisterhood was forged in the Church of the Holy Sepulchre in Jerusalem. Here, over what is believed to be the tomb of Jesus, the Syrian Orthodox Patriarch Mar Dionysius Behnam Jajaweh told Young and Harvey to join their right hands, which he “wrapped in a portion of his garment,” as Young later recalled. “He pronounced a series of prayers over us, told us that we were united as sisters and admonished us not to quarrel. Ours was a sisterhood stronger than blood, confirmed in the outpouring of the Holy Spirit, he said, and since it was a spiritual union, it would last beyond the grave.”

As Catholics gather in Panama for World Youth Day, these contemporary pilgrims might look to the two scholars’ example as they consider how to bring the pilgrimage home – and how its reviving work may deepen their friendships. 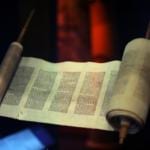 January 20, 2019
Desert Hearts: I watch "The Jewish Cardinal"
Next Post

February 8, 2019 I Believe the Correct Term Is "Worlds War II": Short movie & book reviews on a theme
Browse Our Archives
get the latest from
Eve Tushnet
Sign up for our newsletter
POPULAR AT PATHEOS Catholic
1

Whose June Is It?
Mudblood Catholic
Related posts from Eve Tushnet

Catholic
A Final Note on CDF, Blessings, And the...
Eve Tushnet
TRENDING AT PATHEOS Catholic

Slaves To Mammon
Jesus warned us not to be slaves to mammon. “No one can...
view all Catholic blogs
Copyright 2008-2021, Patheos. All rights reserved.