Some notes and quotations I had to leave out of my intro-to-Salo article due to space constraints.

They talked for over an hour. Near the end, after they’d been sitting in silence for a while, Burns said quietly, “Do you know what Christ died of?”

Rivers looked surprised, but answered readily enough. “Suffocation. Ultimately the position makes it impossible to go on inflating the lungs. A terrible death.”

“That’s what I find so horrifying. Somebody had to imagine that death. I mean, just in order to invent it as a method of execution. You know that thing in the Bible? ‘The imagination of man’s heart is evil from his youth’? I used to wonder why pick on that? Why his imagination? But it’s absolutely right.”
–Pat Barker, Regeneration

There’s a lot of theological talk nowadays about storytelling, and sometimes even an underlying assumption that all storytelling is “subcreation”: that there’s something inherently humble and holy about storytelling and the use of the imagination. Salo is about, in part, the fact that some storytelling is “sub-destruction”–participating in the destructive work of the Devil. The stories we tell, the stories we train others to tell, are necessary if we want to treat other people as objects. Dehumanization, the central act of torture, requires storytelling. It requires the use of the imagination against another human being.

There’s an anecdote which I haven’t been able to find–I’m pretty sure I read it in a book of feminist film criticism–about the movie The Accused. This was a famous taboo-breaking film about a rape case. The point of the film is in its title: It’s about how the trial became an interrogation and judgment of the victim; she became “the accused,” on trial for asking for it. OK, and so, the movie shows the rape itself. It’s filmed in what is intended to be a gritty, realistic style.

People catcalled. They hooted and acted like they were suddenly watching something hot. Obviously that’s a problem with them, but it’s also a problem in moviemaking. Showing the victim’s anguish turns out not to be the way to evoke empathy. The intense focus on her pain and horror is an intense focus on her. She becomes the object of spectatorship and available for sexualization. One of the insights of Salo is that using the conventions of “realism” isn’t always the best way to show suffering or powerless people as human–which we should all know anyway since we see suffering or powerless people all the time, under the semi-realistic conventions of reality. So Salo is intensely stylized and distanced. It cares more about the distorted laughter of the sadists than the tears of the victims, which is important since the tears of the victims are what sadists look for. It assumes a coiling, subterranean desire for sadism and dehumanization in its audience (it’s right) and programmatically refuses to give that hidden, hissing creature what it wants. There’s no culturally-conditioned misogyny strong enough to keep you from realizing that if you’re into Salo, that is extremely on you.

The reactions, desperation, emotional interiority of the victims emerge only in glimpses: “My God, why have you abandoned us?” We don’t see through the sadists’ eyes.

The thing that made me think of The Act of Killing in connection with this movie is a line from Victor Morton’s review: “Jean-Luc Godard famously said that the film that needed to made about the concentration camps was about the guards, not the prisoners.” I was also reminded of Police, Adjective, another movie about storytelling as a tool of destructive power. Foucault quotes this bit from Sade’s 120 Days:

“Your narrations must be decorated with the most numerous and searching details; the precise way and extent to which we may judge how the passion you describe relates to human manners and man’s character is determined by your willingness to disguise no circumstance; and what is more, the least circumstance is apt to have an immense influence upon the procuring of that kind of sensory irritation we expect from your stories.”

There are two moments where the film “breaks character,” which I talk about in the America piece: one Marxist basically, one Catholic. The Marxist moment has an actual if fleeting effect in the real world, and is sentimental more or less exactly for that reason. It’s unconvincing. Why would these sadists, as presented to us thus far, fall back in fear when a victim raises his fist? Why not just laugh and shoot him like they always do? The Catholic moment is utterly ineffective within the world of the film, and for that reason, I think, more haunting and persuasive. There’s more truth in it: This moment matters although it doesn’t pause the cruelty even for a second. It isn’t a reprieve from the story the movie is telling. It is, instead, a reframing of the events of the plot, so that they are events in a story which extends before and after the events we see on screen: Suddenly we’re now in an awful part of a story which ends in resurrection. We won’t see that part (we don’t see the moment Christ rises from the tomb; the Cross is a spectacle but the Resurrection resists spectatorship) but the film itself has now evoked that story, a story in which the killers are destroying only themselves. 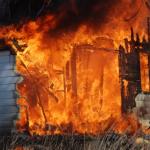 August 31, 2019 Gods of the Lost: Three short book notes
Browse Our Archives
get the latest from
Eve Tushnet
Sign up for our newsletter
POPULAR AT PATHEOS Catholic
1