A Lie Is a Wish Your Heart Makes: Four short movie reviews

The Trouble with Angels: An essentially charming confection from 1966, set in one of those stern-but-fair ’50s and ’60s Hollywood Catholic schools. Ida Lupino directs a script by Blanche Hanalis based on Jane Trahey’s novel, and if that lineage makes you think this will be a delightful plunge into a world made by women for girls, you are correct. Hayley Mills is the innocent scapegrace constantly getting her best friend into extremely wholesome trouble before facing the stern-but-fair Mother Superior (Rosalind Russell).

I enjoyed this immensely, with one major caveat. The “angels” have a school enemy, and they get revenge on her by coating her face in plaster of Paris (??? iirc) but then they can’t figure out how to get it off. She’s left breathing through straws shoved up her nose, unable to speak (or scream, which iirc she’s trying to do); I can’t remember if she can even hear what’s being said outside her mask. For hours, lying in the infirmary making muffled comedy terror noises as the Mother Superior chips painfully away. I would have panicked, you know? I would have been terrified and furious, and I couldn’t laugh at it. School stories often treat this kind of physical, degrading, frightening and maybe dangerous prank as something the victim deserves and should just get over–learn to laugh at yourself!–and they never seem to know where to draw the line, because they never imagine the victim’s real fear. (Like, this scene here would probably be fine for me if the girl could speak. But then they’d have to imagine what she would feel and say!)

Anyway, if you skip that whole episode this is a great movie. “Generally funny, gentle, and sweet, too bad about the ten minutes of dehumanization!” I guess….

The Farewell: Billi (Awkwafina!!!!!) came to the USA as a child, leaving her beloved grandmother behind in China. Now Grandmother is dying–but nobody will tell her. The doctors and the family conspire together to keep her from learning her diagnosis, and arrange a huge fake wedding as a pretext to bring the family back to China for a covert farewell. Billi represents the assimilated American, who can’t hide her emotions, who wonders if Grandmother should get the chance to reckon with any unfinished business, who points out that in America what they’re doing would be–she doesn’t know the Chinese word, but in English it’s “illegal”! Her father and uncle–and everyone else, really–represent the Chinese perspective, in which we all are parts of a whole, in which the family must shoulder the burden of their secret in order to spare their matriarch the fear of dying. It’s a comedy!

Awkwafina is a joy, as always. The script is smart, and the wedding hijinks give it an obvious structure. It’s “based on a true lie”–and we do find out what happened to the IRL grandmother, though that tidbit raises more questions than it answers! (Throughout the film there are hints that the grandmother may know more than she lets on.) Writer/director Lulu Wang uses the camera to show the grandmother’s isolation within her family’s protective dishonesty, and Billi’s isolation as she discovers how American she really is. The family forms a phalanx, sometimes subtly (the father and uncle in the same shot, while Billi gets her own shots, beside the window bathed in street light like an Edward Hopper girl), sometimes hilariously (they get a superhero team strut, shot from below! BUT ARE THEY HEROES REALLY).

I saw this with my best friend, who’s Taiwanese-American. She thought it captured really well the immigrant feeling that something has been taken from you. Billi is bereft; she’s no longer at home in the place she came from, but she still needs it, and needs it to be home. (It’s a comedy….) The music conveys the mixing of cultures beautifully–pop music merging with opera, Chinese drinking-game songs, a whole wild medley–but the movie is pretty uncompromising in depicting a culture clash, irreconcilable. Billi has to choose whether she’ll tell her grandmother the truth about what her family calls the “benign shadows” on her x-rays. The Farewell commits to the culture clash rather than, as in Crazy Rich Asians, imagining a jujitsu resolution in which both American freedom and Chinese sacrificial filial piety can be equally fulfilled.

Dead Broke: What a weird movie! I have to say this failed, because it squanders all the rich oddity of its premise, but that doesn’t mean you’ll regret watching it. John Glover (!) is a cop investigating a shooting outside the Polite Persistence debt-collection agency. Over the course of a night he unveils all the squiggling, extremely 1998 cynical creepy weirdness of all the debt collectors. (A bumper sticker on the wall reads PEROT FOR PRESIDENT.) Glover is drawly, relishing his work as always. Even when he’s being defensive he’s delighted to get the chance to be defensive, as when the rubber-faced, ranting, ratlike Frankie (Patricia Scanlon) accuses him of just trying to fill his arrest quota. He carols, “I don’t have a quota!” and she, getting very 1990s in the face, snaps, “Everybody has a quota.”

That’s about as insightful as the movie gets on the subject of debt and its pursuit. The collection agency hounds people (Frankie’s phone manner: “You disgust me. I’m calling the sheriff. Listen for the sirens!”) but I don’t know that this movie has much to say about debt as such, or the shame of debt, or financial desperation, or whatever. The second half of the movie really unravels–it loves introducing us to these kooks, but doesn’t know what to do with them.

The Ritual: A night out on the town goes horribly wrong, and what should have been a lads’ holiday ends up as a memorial journey in the remote Swedish woods. The film follows the beats of The Descent quite closely, but with men instead of women, and Swedish pagans and their god instead of cavedwellers. That’s fine–those are good beats!–and this is a well-done horror film, with authentic notes of grief and guilt, gorgeous trackless woods smoking with mist, and creature design which offers real pleasurable terror. The dynamics in the group of men are a lot simpler than in The Descent and the characters less differentiated, which is why the earlier film is a modern classic whereas this is a good scary night under the blankets with Netflix. I admit I found the final confrontation underwhelming. 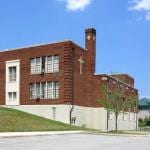 September 14, 2019 Just Because You're Paranoid: I watch "Doubt" at Studio Theatre
Browse Our Archives
Related posts from Eve Tushnet

The Works of Mercy
"If our church is not marked by caring for the poor, the...
view all Catholic blogs
Copyright 2008-2021, Patheos. All rights reserved.
Close Ad