Love the Player, Hate the Game

Recently watched The Interrupters, a PBS documentary about a group of Chicagoans who seek to prevent murders by “interrupting” the cycle of anger, vengeance, and despair which leads people to choose to do violence against others. These people, (almost?) all of whom have gnarly criminal histories themselves, find potential perpetrators at vulnerable moments–on probation, or after they’ve been shot, etc–and stick with them, doggedly making the arguments for peace. They can’t offer a whole lot in terms of practical incentives. They can’t guarantee a job, to pick one obvious example that a lot of them I think really wish they could hand out like “Stop the Killings” t-shirts. But for this very reason the group relies on that shockingly strong force so many elite-planned initiatives disregard: the moral backbone of the poor.

The Interrupters is much better than it had to be. It gets into some questions which a more propagandistic documentary might exclude, like the group’s relationship with the police and the inevitable consequences of recruiting people whose primary qualifications are a (past) history of violence themselves and a sincere desire to keep other people from heading down the same road. Definitely worth your time if you’re interested in what fuels urban violence and which approaches can postpone and, ideally, prevent it. Some notes:

# The group takes the approach described here, and which, as my friend Charles Lehman points out, roughly tracks Cory Booker’s Break the Cycle of Violence Act.

# The interrupters deal with a specific subset of violence, which you might call urban violence for its own sake between neighbors or strangers. Not child abuse, and not domestic violence; they deal with gang violence, but not only gang violence; we don’t see them addressing sexual violence, or violence that arises out of robbery or burglary. And among the perpetrators of this subset of violence it seems like pretty much nobody is solely a perpetrator. Everybody whose violence the “interrupters” are trying to interrupt has been a victim of violence in the past and is pretty clearly at risk in the present and future. Some people are simply victims of this kind of violence–the toddler who catches a stray bullet, for example. But the perpetrators are rarely only perpetrators.

# Remember when I read all those books on DC history, and noticed how many of them were about the crucial role played by the “in-betweener,” the person with one foot in the church and one foot in the streets? The interrupters have to maintain the ability to put up a hard, street front, so that they’re taken seriously. They have to be able to draw on that street history, to carry themselves the way they did back in the day. It’s hard to live like that; you don’t get to disappear inside your new religious faith or peaceful respectability. One woman in this documentary does seem to be projecting a lot of herself onto the younger woman she’s mentoring. That’s how she earns some very hard-won degree of trust from the girl. It’s something she can offer: I will be your mother, since your own mother can’t or won’t be there for you. But it’s also, I think, a big part of the drama and failures which punctuate their relationship. The characteristic angers and conflicts of mother-daughter relationships get replicated as well as the characteristic sacrifices and longings.

Pretty sure this gun picture is via Wikimedia Commons. 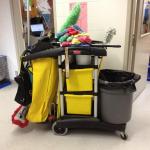 November 4, 2019 Tell Me About Your "Sober Jobs" (And More, On Work in Recovery)
Browse Our Archives
Follow Us!

Catholic
"On the Brink of a 'Filipino Moment'" in...
Eve Tushnet
TRENDING AT PATHEOS Catholic

Of Goya Foods, Boycotts and the Sons and...
So, Robert Unanue, the CEO of Goya Foods, went to the White...
view all Catholic blogs
Copyright 2008-2020, Patheos. All rights reserved.