The first frames of the new Candyman show the familiar logos–Universal’s cloud-wrapped earth and all the lesser production-house symbols–backward, a mirror image, so you wonder if something’s gone wrong with the film. It’s unsubtle in one sense: This is different! This is new! We’re not just rebooting a “property” (sort of a fraught word here, no?), we’re uhhhhhh rebooting it backwards!

But then the opening credits appear against an upside-down city, the gleaming luxury city that replaced Cabrini-Green, and the full power of that blunt opening idea begins to take hold. The new Candyman is sly and haunting, shifting the original movie and building on it, honoring all that was great in it and reversing all that was unmarked, default, merely normal. It’s as iconic as its predecessor.

We see a flashback first, a 1970s scene of a man beaten to death by police in the Cabrini-Green projects of Chicago–the site of the original film. This man’s death seems to be the origin of the Candyman urban legend, although we know, from the first film, that there’s more to the story. Then Fortune’s wheel turns. In the upside-down city, some places rise and some people fall. It’s 2021 and a prosperous gay couple, a black guy and a white guy, stroll through the ex-ghetto with a bottle of wine. They’re going to visit the black guy’s sister, Brianna (Teyonah Parris), and her reclusive artist boyfriend, Anthony (Yahya Abdul-Mateen II). And they’re also going to tell the story of Candyman: the hook-handed killer who haunts the place where the projects once stood, who comes out of the mirror when you say his name five times. That story will obsess Anthony, as once it obsessed the doomed grad student Helen Lyle (Virginia Madsen, of course). Anthony’s obsession with Candyman will take him into violent places he never meant to go, where the past isn’t dead–it’s just unevenly distributed.

The new film’s central reversal is the one everybody figured writer/director Nia DaCosta (with co-writers Win Rosenfeld and Jordan Peele) would make, the one you should make: Original Candyman was the ghetto journey of a white person and new Candyman‘s sojourner into nightmare is black. But the reversals are deeper and subtler than that. Helen was studying semiotics, which for the purposes of this review I’m gonna say is close enough to the social sciences for government work; and the social sciences were, at the time, the premier lens by which white liberals understood the ghetto. (“[B]y the late 1960s, there were more sociologists working in Pruitt-Igoe [projects] than dedicated maintenance workers.”) Anthony is an artist. Candyman‘s razor flashes of humor often come from the ways in which art has become the new social science: the new way to interpret and trade on the ghetto, to monetize it, to say true things in such a way that they become lies.

And Helen was an outsider, whereas Anthony… is an outsider, a man with no Cabrini-Green memories to draw on, but as a black man in Chicago he can’t ever be as far outside the projects as he thinks he is. There’s an electric scene where he climbs over a fence into the abandoned hinterlands of Cabrini-Green, ducking behind a wall to hide from a passing cop car: This place doesn’t belong to him, but his trespassing, unlike Helen’s legal version of the same thing, is also a homecoming. He doesn’t know enough to walk this place safely but he also belongs to it in a way he doesn’t yet understand.

There’s a deep, heartbroken pessimism in this film. At first I thought it might be one of those X-Men type narratives, you know, what if the twist is that the villain is just a hero who goes too far? But it is deeper than that. The film honors Helen Lyle’s sacrifice but does not recapitulate it; it ends with an ambiguous, despairing attempt to turn Fortune’s wheel one more time, so that those who have been destroyed by American life will end up on top at last. I guess I have to say that this is a more normal horror ending than the original one and I was not sure it worked as well. The original’s ending had a certain call embedded in it–a call to a difficult, dangerous, healing path forward for the audience. It’s a communal scene. This movie ends with two individuals… and then, as a kind of disclaimer, a website you can visit for information on like racial justice and healing. Why not just show a scene of racial justice and healing if that’s what you care about? Why not show what it might cost, and what it might offer? But that is harder to imagine than the satisfactions we get from the ending of the new film.

For real, though, the new Candyman feels like it could have been invented yesterday. The story feels like it was always contemporary, always pointing toward this moment. It isn’t just that “Say Her Name” and related slogans have crystallized anguish and fury over police violence. Candyman is a story about being trapped in a story; it’s about art that plays on the edge, that likes to be daring in exposing its anguish but then exposes too much, that thinks you can know and thereby control what you’re saying. It’s a mainstream film about the tense, inextricable intertwining of art about black pain and commodification of that art and that pain. There’s a knowing rawness to the film that’s just about unique.

I had a couple aesthetic criticisms of the film, basically just that some of the cuts didn’t quite make sense to me (e.g. the weird arrhythmic cutting of the art gallery sex scene) and making Candyman visible only in mirrors made some of the kills, imho, look silly. But mostly the look of the film is perfect. Throughout the film black paper silhouettes, made by Manual Cinema and reminiscent of the work of Kara Walker, tell the backstory. The silhouette figures are moved around on sticks or wires like puppets in unseen hands. The closing credits tell many more stories in this puppetry. The puppets, the bees, the hook and the candy, the mirrors–it all makes the film feel dreamlike in a way that, say, Get Out doesn’t quite attempt. Candyman is surreal and childlike: how a child might come to terms with the world handed down. Yahya Abdul-Mateen II is phenomenal as Anthony. His subterranean discomfort, his weird little grin and subtly widened, excited eyes when things start to jump bad, he really conveys a dude with layers. A labyrinth in paint-splattered coveralls.

I’m reading Darieck Scott’s Extravagant Abjection: Blackness, Power, and Sexuality in the African-American Literary Imagination, and he talks, following Frantz Fanon, about how blackness is imposed as an instrument of domination; people are “blackened.” And yet in this blackness, which is defined by its subjugation and abjection, there may be strange, disguised, unexpected forms of freedom, even power. Over the course of this movie Anthony McCoy gets “blackened” for sure, in every sense. And in the depths of his abjection he too touches a kind of power which could not be found outside that abjection.

September 20, 2021
"Inside the Catastrophe Itself": Reviewing Danielle Evans's new fiction collection
Next Post 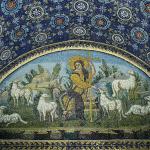 October 11, 2021 God's Answers Deserve Better Questions: What I said at Revoice 21
Browse Our Archives
get the latest updates from
Eve Tushnet
and the Patheos
Catholic
Channel
POPULAR AT PATHEOS Catholic
1

On Harassment and Spiritual Abuse in...
Steel Magnificat
Related posts from Eve Tushnet

Catholic
I Don't Wanna Be Buried in a "Pet...
Eve Tushnet
TRENDING AT PATHEOS Catholic