The Letter: A Response to Governor McAuliffe

In which I take a letter that really ticked me off to expose the outrage of it, but more, to give glory to the GOD who truly restores the ineligible.

To: Terence R. McAuliffe, Governor of Virginia
Commonweath of Virginia

A couple of weeks ago, my husband, Francis John McDonnell, received a letter from your office. The letter, sent from Kelly Thomasson, the Secretary of the Commonwealth, informed Fra that you, the Governor, had “restored [his] civil rights.” It was accompanied by an “official restoration order,” complete with an impressive gold seal. (Apologies for bending the seal.)

Thomasson went on to inform my husband that his “prior conviction no longer restricts” his “right to register to vote.” And you conveniently included a voter registration form as well as information for registering online. In addition, those “prior convictions,” you told him, could no longer restrict him from becoming a notary public, serve on a jury, or hold public office! Alas, the only civil right you did not restore to him was “the right to ship, transport, possess, or receive firearms.”

Well, I know what Francis would say to you about all this, but now it is my turn to inform you of three things:

I would tell you exactly what Francis would have said to you had he been alive and only #2 and #3 been the case but I can’t put that language in print.

Francis did a complete political/philosophical turnaround during his life, from being an IRA/Marxism/Pro-Palestine (such a strange, but common, combination!) supporter to being more conservative than his quite conservative wife. It was he encouraged me to become familiar with the icons of free market capitalism, like Hayek, and to read The Road to Serfdom, and I, Pencil.

He wrote letters to the editors of Northern Ireland’s most Leftist newspapers, sharing his own disillusionment with Socialism. In those letters Fra made lots of Irish Republican enemies, calling them fools for supporting Hamas, an ideology seeking global hegemony — something that should be very distasteful to the Irish sensibility. He was a devoted fan of Mark Levin, too. You should LOVE that, Governor!

My husband would also tell you that you must have done a heck of a job (only he wouldn’t say “heck”) of completing a “review of the particulars” of his case, if you couldn’t even be bothered to discover (or to care, more likely) that he was not a U.S. citizen. “Bollocks!” Or in a less graphic, more cryptic Belfast insult, he would tell you “Our dog has it!” (I never have found out what it is our dog has. It’s just one of those colorful Belfast mysteries that I loved about Fra.)

Francis would really laugh when he read the part of the restoration order that says:

Whereas, it appears that Francis McDonnell has rejoined society free from state supervision. . .

He would have responded, “And it appears there’s plenty of room for you, ya gob.”

Just before the events that led to my husband leaving the country, he was trying very hard to become a U.S. citizen because he loved America and what it stands for. He had hired an attorney to clear his name — as you have miraculously done now, and free of charge! — when a seemingly innocuous decision led him down a road from which he could never escape again.

Now you tell him that he has the “right” to vote! Don’t we look at voting as a privilege, a privilege of the nation’s citizens, and not a “right”? But then, if men have the right to use women’s bathrooms, (Fra would definitely be in trouble with the law if he ever witnessed that taking place!) it is obvious that the definition of “rights” has disintegrated.

Francis now has the right to vote, not because he loved this country and wanted to become a U.S. citizen, but because you assume that as someone with prior convictions would vote for the Democrat Party! If you only knew! But more to the point, I wonder how many recipients of The Letter that you have pardoned are 1. not U.S. citizens and/or 2. are dead? I’m sure their ranks will swell the Democrat rolls.

Now, as for my husband, Fra has joined a society free from state supervision, in which he has been pardoned for crimes — and more critically — pardoned from sin. That is the ultimate irony of your letter. A letter with the purpose of inviting my husband into a society to which he cannot belong (not a U.S. citizen, and not, therefore, eligible to vote in U.S. elections, regardless of your ‘restoration’), is a sad little metaphor for a far superior Restoration.

Fra has been embraced by the God of the universe, and is in the Society described by another wild Irishmen, the late Father Brennan Manning, who said in The Ragamuffin Gospel of the astonishing collection of ragamuffins collected by Jesus and brought into Eternity:

There we are – the multitude who so wanted to be faithful, who at times got defeated, soiled by life, and bested by trials, wearing the bloodied garments of life’s tribulations, but through it all clung to faith.

Manning challenged elsewhere, that God’s authority to restore weak and wounded men and women to Himself is triggered by His Love:

As we are and not as we should be.

Your letter to my husband is addressed as to him as he should be, for your own purposes: alive, free from the taint of criminality, and as a voting-eligible U.S. citizen. That is his worthiness to you. But in the restoration order that took place at the moment that Fra was dying, he looked into the eyes of Love and finally believed it was all real, and all for him. What he should be and what he was became one. 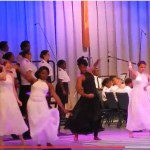 November 2, 2016
Taking Their Place at the Feast
Next Post 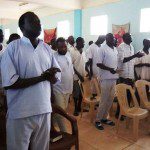 November 22, 2016 Four Prisoners at Thanksgiving
Recent Comments
0 | Leave a Comment
"No True Scotsman Fallacy. Can't separate the atrocities of Christians from the bibleUnless, you apply ..."
Christian Found Guilty
"No it is not. They are not remotely Christian. Kony may have styled it after ..."
faithmcdonnell Found Guilty
"The LRA is the Christian version of Boko Haram"
Christian Found Guilty
"I have noticed that historically theologians have always caved to non-Christian intellectuals.I think this is ..."
Ste Infiltration of Cultural Marxism in US ..."
Browse Our Archives
get the latest updates from
Faith and Chelsen
and the Patheos
Evangelical
Channel
POPULAR AT PATHEOS Evangelical
1

10 Questions Christians Should Ask Before...
Theological Apologetics
Books by This Author Books by Faith McDonnell