An Open Letter to George Clooney

May I call you that? I feel close to you because I was mere inches away when the police hustled you off the steps of the Sudan Embassy and arrested you in 2012. At that point I was an 18 year veteran of Sudan/South Sudan advocacy. Then last week, you and I shared top billing (just kidding) in the local Washington, DC area news coverage of the Sudan sanction issue.

We did it! All of us — members of Congress, activists, Sudanese marginalized people, writers, and a few celebrities — that worked to convince the Trump Administration not to permanently lift the long-established sanctions on Sudan, removed by President Obama during his last week in office. We have succeeded in pushing that final determination forward for three months.

The delay, set out in the Executive Order to amend Executive Order 13761 will give President Trump time to work, in spite of the ongoing harassment and demonization by the media (might you be able to help with that?), to appoint, hopefully, strong, wise people into such appointments as Assistant Secretary of State for Africa, Sudan and South Sudan Special Envoy, U.S. Ambassador to South Sudan, and others.

We need people in these positions who feel the way that you do, and I do, about the genocidal jihadist Islamic Republic of Sudan regime, and about Omar al Bashir and his entire cohort of jihadis. We don’t need people who pontificate:

The war is not about humanitarian access. Making humanitarian access the be-all and end-all of the war is just another brilliant diversionary technique on the part of a regime that has more red herrings than the galley on a British cruise ship. The war is a war of elimination. Elimination of Sudan’s marginalized (a.k.a. Black, African) people groups is necessary to make way for the Caliphate Builders.

And speaking of Caliphate building…Not sure if you are aware of exactly how entrenched the National Congress Party (formerly known as the National Islamic Front) is in the Caliphate-building venture. In your Time op-ed with John Prendergast you laid out the Khartoum regime’s many iniquities for Squire Patton Boggs, the law and lobbying firm that has taken on the Sudan government as a client. But you barely touched how Sudan impacts global and national security, just saying that it is on the U.S. “state sponsors of terror” list.

Perhaps you were concerned that the terrorism connection is the weakest part of your argument? Because in response to your op-ed, the staff typist at Squire Patton Boggs wrote, “Since 2015 the United States government has been engaged in a productive dialogue with Sudan intended to improve human rights conditions in Sudan and to secure important Sudanese cooperation with the fight against global terrorism.”

But Khartoum’s “productive dialogue” is all smoke and mirrors. Or to put it in the way that it would be phrased by Khartoum’s victims — victims of the regime’s physical attacks that is, not victims of stupidity and wishful thinking like Western dupes — it is all part of Khartoum’s “charm offensive.”

“Securing important Sudanese cooperation with the fight against global terrorism”? Khartoum never gives anyone up unless it benefits the regime and the agenda of Islamization and Arabization in Africa and beyond. Or unless they are annoyed with that particular person and see it as a two-for-one!

For decades, Sudanese and South Sudanese who care not only about their own nations, but about the safety of the United States, have been warning the United States government that the Khartoum has not been telling the U.S. the truth. People such as South Sudan’s American basketball star Manute Bol warned the U.S. State Department about Osama bin Laden, and that Khartoum has been training mujahedeen world over since the 1980’s in preparation for the takeover of Islam. They pointed out on maps the locations of terrorist training camps — camps that train not only Sudan’s jihadists, but Boko Haram, al Shabaab, Hamas, and terrorists from Libya, Mali, and elsewhere.

In the last couple of months leaked correspondence to the leaders of al Qaeda, the Islamic State (ISIS), and Hamas from Islamists in Sudan – including Sudan government officials – reveal the support offered by the Khartoum regime to terrorist organizations. These letters, received by my colleagues from sources that must be protected, range in date from November 2016 back to May 2011. They have been provided to U.S. government agencies that have deemed them authentic. — I’d be happy to provide you with copies of these letters — both original Arabic and translations. They will soon be posted in their entirety at Juicy Ecumenism, the blog of the Institute on Religion and Democracy.

A brief preview: There is a July 2016 letter from the Islamic Movement in Sudan addressed to Ibrahim Awad Ali Al Bedri Al Samri – more familiar to us as Abubakar Al Baghdadi, the head of ISIS (who has fortunately since that time met his Maker). That letter pledges Sudan’s loyalty to him and says, “The Nation of Sudan is helping us transfer our money from Islamic countries to the outside world, the infidel countries, those who are launching airstrikes against us. The Sudanese government has agreed to transfer our money in hard currency and gold bullion so that the infidel cannot access it.”

And then of course there is Khartoum’s support — financial and otherwise for the armed rebel combatant terrorists led by the sociopath Riek Machar. But that needs a whole other letter that you can ponder over a cup of coffee. It is just another indication that when the regime declares jihad they don’t take it back, no matter how much the State Department wishes it to be so.

Nothing has changed with the Islamist regime in Sudan. And nothing will change until the United States and others acknowledge the extent of its evil and support all of the Sudanese that want secular democracy, religious freedom, and equality for the people. Thank you for speaking out against Bashir and the regime, and for shaming Squire Patton Boggs. Please continue your advocacy, and maybe the day will come when you will never have to be arrested at the Sudan Embassy again.

Yours sincerely for freedom and justice in Sudan,

June 2, 2017
What Maternity Leave in Ministry Means
Next Post 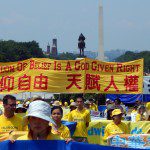