A Prayer for Ted Cruz (Not the way he wants)

This is a prayer. I pray that when the media reports on politicians, and in particular, those running for President of the United States, that not all Christians are conservatives. Please don’t allow lazy stereotypes and tropes be used to assume there is one acceptable brand of faith.

Yesterday, as Texas GOP junior Senator Ted Cruz announced at Liberty University he was running for the Republican nomination to be President of the United States, I listened hard, as I heard him say, “I believe God isn’t done with America yet.” 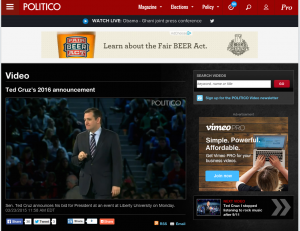 I will admit it’s catchy. But I’m not sure one can argue Christians love all people under Jesus Christ, and in that same speech loathe so many Americans such as anyone in favor of healthcare for all, fewer guns and a more tolerant immigration system. He also quoted freedom and liberty about a dozen times, except when a woman wishes to choose what’s best for her own body. Don’t accept the premise that Christians and the millions of faithful in the United States want what Ted Cruz is selling.

Five years ago Monday, Obamacare became law, and the 16 million Americans have earned healthcare with more than 100 million people no longer having to worry about lifetime limits or pre-existing conditions. But Cruz pledged to repeal the law his first day in office. Those thousands of Liberty University students cheering live for this legislation’s repeal may feel differently about the law once they graduate and need that very same health care coverage or stay under their parent’s plan, thanks to the ACA.

Then Cruz took to defending the 2nd Amendment because for some reason, the amendment — which has had its restrictions weakened since Sandy Hook school massacre — needs more support. How is the Jesus who preached non-violence and to turn the other cheek in the Sermon on the Mount in favor of ammunition for all and an unrestricted 2nd Amendment when mass shootings are commonplace? Why were there so many cheers for more guns and ammo? Where is the faithful message to cherish all lives, not just when they are born, but throughout their life?

Christians are taught not to ridicule their enemies. They love them. I’m not judging Sen. Cruz’s faith. I believe it’s genuine. But I do not wish to be lumped in with his brand of Christianity. Neither do so many millions of faithful Americans who believe in a God welcoming the stranger and caring for their brothers and sisters when they’re ill and need a helping hand.

At the end of his speech, Sen. Cruz said it’s time for truth. I couldn’t agree more senator. Truth, I’m praying for you. But probably not the way you want me to pray for you.

March 8, 2015
50th Anniversary of Six Hundred in Selma
Next Post

March 28, 2015 Religious Liberty vs. LGBT Rights: How the Church Is Missing the Point
Recent Comments
0 | Leave a Comment
"I believe he carries the rosary beads to use the beads to mark his way ..."
Bob Shiloh Joe Biden and the Christian Call ..."
"And the mud in the DC creek is getting deeper and deeper for the Bidens.. ..."
jaystriggle Life-long Republican Will Vote for Joe ..."
"Your comments about Trump's policies are completely wrong. As to socialism utterly wrong."
Bob Shiloh Life-long Republican Will Vote for Joe ..."
"And the corruption at the top has already started with the Biden family."
Bob Shiloh Life-long Republican Will Vote for Joe ..."
Browse Our Archives
get the latest from
Faithful Democrats
Sign up for our newsletter
POPULAR AT PATHEOS Politics Blue
1

We Could All Be Better at...
Empathy Mining
Related posts from Faithful Democrats