Hey, Did You Know Miranda Kerr Is Buddhist? 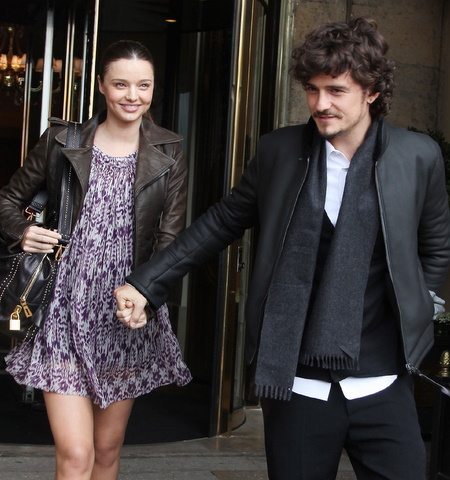 The Victoria’s Secret annual fashion show aired on Tuesday night. The star of the show was Australian model Miranda Kerr, who wore the $2.5M jewel-encrusted bra that traditionally appears in the show. In honor of this occasion, New York magazine followed Kerr around for a day as she prepped for the show. In the midst of fittings and finery, there are some casual references to Kerr’s spiritual beliefs:

She and [her husband, actor Orlando] Bloom are practicing Nichiren Buddhists, but she doesn’t want to talk about that. He’s good at changing diapers since “he’s a Capricorn” and “they’re really hands on.” (Kerr is an Aries: “Not shy and kind of out there.”) They have homes in L.A. and the English countryside, as well as a New York apartment that is “too small,” so they just stay at hotels. “I really feel like the world is our home,” she says.

Orlando Bloom has been a Buddhist for some time now, but this is the first confirmation I’ve heard that Miranda is an adherent as well. It’s certainly not unusual for a couple to have the same beliefs or for one to get interested in the other’s faith, but of course the one interesting thing about their relationship (no, “the world being your home” isn’t it) is the one thing Miranda doesn’t want to talk about. That said, astrology isn’t part of Buddhism, so I’d like to know how that figures into her belief system and why she felt like bringing it up.

The Wounded Pastor
Even though I am hard on pastors, I still see them as...
view all New Visions blogs
What Are Your Thoughts?leave a comment