Did You Know That Tom Cruise Almost Became a Catholic Priest? 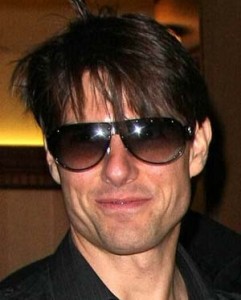 Tom Cruise may be the most visible face of the Church of Scientology, but before he fell in love with Xenu he considered a path in another religion. As a kid, Tom attended a Catholic school in Cincinnati, Ohio, and while there strongly considered joining the priesthood. The New York Daily News has the story:

“Tom was instantly hooked,” said Father Ric Schneider, who gave the speech that brought Cruise to seminary school. “I think he wanted a good education. With his parents going through a divorce, it was tough on him, that’s maybe one of the reasons why he came here.”

“He was a typical teenager, trying to find his way in life. We would give them an IQ test, and he just about made the cut. The cutoff is 110, and he scored exactly 110,” said Schneider, who frequently gave the young teen a ride back to Louisville from Cincinnati for holidays.

Cruise’s closest buddy from the seminary, Shane Dempler, said he was very sincere about becoming a priest.

“He had a very strong Catholic faith,” Dempler said. “We went to Mass, spent time in the chapel and enjoyed hearing stories from the priests. We thought the priests had a great lifestyle and we were really interested in priesthood.”

While at seminary, though, Cruise joined the Drama Club. Aaaaand I think we all know how that one ended.

Interesting side note: one of the reported problems in Tom’s marriage to Katie Holmes was that she had a Catholic background (from Ohio, to boot) and didn’t want to raise their daughter Suri as a Scientologist.

March 11, 2013 Anna Duggar Is Pregnant Again, But Michelle Duggar Isn't
Recent Comments
1 Comment | Leave a Comment
Browse Our Archives
get the latest from
New Visions
Sign up for our newsletter
POPULAR AT PATHEOS New Visions
1