Last week I came across something I had never encountered before. It has fascinated me ever since. 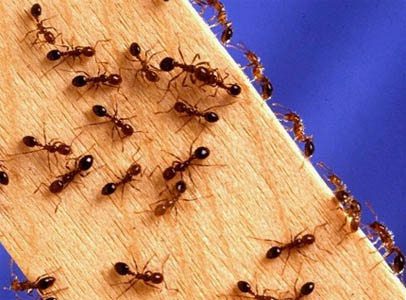 Not ants, per se. I have, in fact, seen those once or twice in my lifetime. It wasn’t the ants themselves, but the silliness of where I found them that befuddled me.

I’ve know animals to do some strange things. I know of someone who once found a snake coiled up around her computer cables. Nice. I once found a baby opossum in my closet. Other friends had a snake living in their attic. But this was a first for me — ants in my computer hard drive.

I keep a back up drive that sits on top of my desktop computer. When I picked up the back up drive recently, ants poured out of it. I stood for moment transfixed by the weirdness of it all, then put it back down so I could think of a solution.

Can’t spray it with ant-killer because the liquid could destroy the hard drive. Can’t put bait down and let them all die in the hard drive. After some examination, I couldn’t see any way to get the outer covering off the drive without doing permanent damage to it. And why were they there in the first place — in the middle of March in the snow capital of Ohio?

Then it came to me. A few days prior, it had gotten pretty spring-like with temps soaring toward 70 degrees. My guess is that the ants woke up from whatever winter slumber they were in and got busy. But then winter returned. Temperatures plunged back into the teens. Unable to get back into their wintry rest, they sought refuge through some minuscule crack in the basement wall — and found a warm and cozy hard drive with cool family videos.

Hey, I’ve Got an Idea

The tedious solution I landed on — perhaps not the best one, I know — was to enclose the drive in one of those big, Ziploc bags. This way, I could keep them contained and eliminate them as they came out of their high-tech lair. (My son says it all reminds him of a Disneyesque blend of Tron and A Bug’s Life. Bron or A Trug’s Life, he calls it. I call it annoying. And silly.)

Now, five days and three bags later, the ants just keep coming out of the drive. Wave after wave come out excitedly — only to be inevitably crushed by forces beyond their comprehension (That would be my fingers). And I can’t help but think — did no ant speak up in protest a week or two ago when the great hard-drive migration of 2013 began?

I can hear the lone ant now, espousing his conservative values:

Hey guys, I know it’s, like, the Ohio Spring and all that, and I get your excitement at pushing the envelope, stretching the boundaries of our societal colony evolution. I want to make it to grasshopper too, you know.

But, um, I’m just kind of thinking that maybe there’s a good reason we’ve never set up a colony in one of those, computer hard drive things. I mean, has anyone heard of such a thing? You know, where it actually worked? Anyone? Anyone spoken to a survivor? It’s not like it couldn’t have been done before, so I’m thinking there’s got to be a good reason why.

No, I don’t know exactly all the implications of what could go wrong, but I’m just — .

Well, yes, I have to admit the whole technology angle is fresh and diverse. And the warmth? That sure sounds loving. Who doesn’t need more of that these days.

What’s that? Who am I to say we shouldn’t forge new ground in colony building?

Well, I don’t know. I mean I’m just an ant, and I suppose I should just go with the flow on this one, but — but maybe all the ants who’ve gone before us were on to something.

Wait! No, wait! What did I say? Guys? Guys, why are you looking at me like that? Put those mandibles back where they came from or so help me!

You know, on second thought, I think I saw another colony a little further out in the mulch, maybe I’ll just  — Aargh!”

OK. So maybe my son and I spent too much time discussing the Disney angle of this tale, but the sheer silliness of their relentless efforts to redefine the definition of a wise location for an ant colony seems to have some eerie parallels to the same-sex marriage silliness unfolding before the Supreme Court these days.

The ants just keep coming out of my hard drive in wave after wave of desperate silliness. There simply is no way this will work. Every few hours, they come out. Every few hours I crush them. Soon there will be now more ants in the hard drive. Their persistence in this foolishness doesn’t change the outcome one bit. It will lead inevitably to the destruction of all and to the elimination of the thing they seemed to truly want.

Change You Can Believe In

When I wrote a post last November following the re-election of President Obama  [ It’s the End of America as We Know It ], some critics claimed I was being paranoid or over-dramatic. But I was simply pointing out what seemed perfectly obvious to me — there has been a significant paradigm shift in our culture and the sooner we come to understand it the better.

You can read an excellent summary by Clark Judge with links to the cases on same-sex marriage before the Supreme Court (HT Hugh Hewitt). Dr. Brian Mattson points out the irony of the discrimination at work in the same-sex marriage efforts.

But seriously. I can’t get past the fact that were even debating the definition of marriage before the highest court in the land. The fact that some readers — whom I love dearly by the way — will leave comments to challenge me on this most basic of cultural touchstones will only prove my point. The silliness of it all is overwhelming.

Like ants in the hard drive. There’s no way this ends well for our culture. Or for the ants.

What You Believe Matters

But this is where our presuppositions, those core beliefs that we all take by faith, become important. If I believe us to be the product of random chance and mutant accidents, then this conversation may be one worth having. But if I believe God created us, whether in a moment or through a process, with a distinct purpose and that He placed us in His created universe governed by universal laws that stem from His very being, then I must conclude that, in his infinite wisdom, he created marriage for that same purpose. And we would be silly to mess with it.

It’s questions like this one before the Supreme Court that give moral ammunition to our enemies. No wonder some Islamic jihadists shake their heads at us and fear the influence of  “destructive” Western cultural values. Sometimes, I share their concern.

We’d disagree vehemently on the solution and approach to change, yet I could see myself sitting down for tea with one of them — assuming we could arrange some way for them to not kill me first — and calmly discussing and even nodding in agreement at the decline of morality in the West with the corresponding increasing demand for unbounded individual freedom. (Moral disclaimer: No, I am not endorsing terrorist activities. I hate that I even have to say that.)

Toward A Free People’s Suicide

Os Guinness warns of this destructive trend to embrace unbridled freedom in his superb book A Free People’s Suicide: Sustainable Freedom and the American Future.

Eric Metaxas rightly says it’s embarrassing to admit you haven’t read it. You must. It’s poignant and prophetic. Uncannily so.

I leave you with a few key thoughts from Guinness to ponder as — oh, look. Here come the ants again, marching two by two! Hurrah.

Only virtue can supply the self-restraint that is an indispensable requirement for liberty. Unrestrained freedom undermines freedom, but any other form of restraint on freedom eventually becomes a contradiction of freedom. ~ Os Guinness

A republic grounded only in a consensus forged of calculation and competing self-interests can never last. ~ Os Guinness [ Tweet this! ]

March 29, 2013 How the Passover Preaches the Gospel of Jesus
Recent Comments
7 Comments | Leave a Comment
Browse Our Archives
get the latest from
Evangelical
Sign up for our newsletter
POPULAR AT PATHEOS Evangelical
1