So Why Did God Answer My Prayer? The Story of a Circle Maker

It was far in the sameness of the woods.

I’ve always wanted to write that line from one of Robert Frost’s more mysterious poems “The Demiurge’s Laugh.” Now seemed like a good time as I reflect on the question of why did God answer my prayer to sell our house — and how He did it.

I suppose I could call it “The Story of a Circle Maker.” 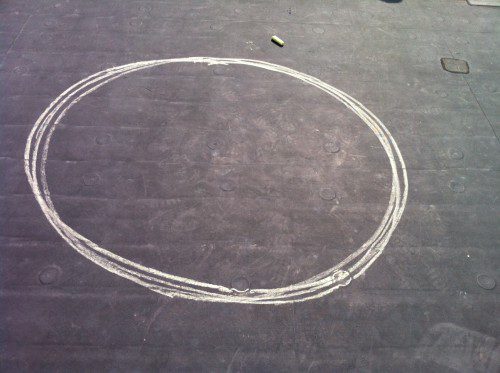 Last September  we decided to move to Atlanta, Georgia, because we thought it would best positions us to answer God’s call on my life. For those wanting to get up to speed on our journey, a click here should help tell the bigger story. After much prayer, counsel, and reflection, we decided to relocate to better position ourselves for ministry to Christ’s church-at-large. And so we moved by faith to put our house on the market.

We prayed expectantly that God would move quickly, that our house would be sold. Because we had stepped away from a safe, secure paycheck, we didn’t have any money to pay the mortgage anyways, so sooner seemed to be better, in my humble opinion.

But God didn’t answer. At least, it didn’t seem so. I prayed expectantly and vigorously — E. M. Bounds would have been proud — that God would have our house under contract by the time I took off for my first mission to Guam with Equip Leadership in early November. But it didn’t happen.

The Story of the Circle Maker

Just prior to my trip, a friend gave me copy of the book by Mark Batterson, The Circle Maker: Praying Circles Around Your Biggest Dreams and Greatest Fears

. I’m not going to delve into whether or not I agree with everything in the book here. However, the essence of the book is a simple call to pray focused, intentional prayers. Whether we physically circle something or not is, from God’s perspective, irrelevant  But it might be helpful to symbolically increase our own faith.

As I flew the 24 hours of travel to Guam, I began to read The Circle Maker. I recall Mark Batterson describing how he had prayed confidently at one point, yet God didn’t answer right away.  As I was reading this, thinking about the promises of God, and praying about our house, a crazy thing happened. It was as if a Divine thought jarred my senses — not audibly, but the message couldn’t have been clearer.

It was as if God had spoken: “You prayed. I answered. Just like I promised I would. Your house is already sold. I just haven’t told you the details yet.”

But Do I Really Believe?

During my trip to Guam, I decided to take a step of faith by shifting my prayers about the house sale to one of celebration and thanksgiving for what God had already done but not yet revealed.

When I returned home, I described the approach to my wife and kids. Then I proposed something  really weird. “To help us focus as a family, let’s circle our house. We’ll walk around it each day. And as we do, we’ll thank God for selling our house and ask Him to reveal the details in His time and in His way.” Our prayer then was really for the faith to keep walking and waiting for Him to let us in on His answer.

Incredibly, they agreed. It was November, after all. In northern Ohio, that means snow, cold, and generally uncomfortable conditions.

But we did it. We walked around the house once a day for six days, each time praying and thanking God for answering our prayer. I will never forget hearing our children claim God’s promises in prayer and asking Him to fill in the details when He was ready. It was a moving faith experience, to say the least.

On the seventh day — not claiming any divine inspiration here — we walked seven times. And then we waited. Well, we kept praying inside the house, too. And I walked around the house more than a few times myself. But you get the idea.

And so we waited. For five months. With no income. Nothing. Just silence.

It was during those months of waiting, endless and unproductive house showings, and lack of clarity in general that I began to feel what Frost described as “being far in the sameness of the woods.”  Looking back now, I can see that we were being tested to some extent. After a while, every day started to look the same. I was tempted, and likely gave in all too often, to wonder if God had forgotten our prayer. We were left feeling a bit confused, kind of  like Mary at the tomb.

And Then the Answer Came.

After six months, we told our realtor we would be taking the house off the market. We still believed — mostly —  but our second mission to Guam was coming up. It was only after we took the house off the market, only after our efforts to make the move had failed, that God let us in on His little secret. It was then that family members approached us and told us they were thinking about buying our house.

Now, here’s where it gets good. One reason we had trouble selling the house earlier is that we needed to get enough from the sale to pay off the existing mortgage. We also wanted a little left over to help us make the move to Atlanta. But with the realtor fees (and we had an awesome realtor), there just wasn’t enough margin to work with. Now that we had no realtor in place, the potential for a win / win  situation existed.

In other words, in order for this deal to be possible, we needed to wait until the arrangement with our realtor expired. Only then would God bring an answer from an unexpected place and in an unexpected way.

So the house was sold. He just hadn’t told us the details yet.

Why Did God Answer My Prayer?

I don’t know about you, but I am quick to forget why God answers prayer in the first place. I assume all too easily that it is about me — my need, my desire, my pressing issue. But God exists not to reveal my glory but His.

He delivers me from ____, He saves me from ___, He provides when I need  ____ so that he may glorify Himself through His goodness to me. It was for this purpose I was created. “To glorify God and” — through that process — “enjoy Him forever.”

We can rightly point to other reasons God may have for answering when we call on Him. To show His love for us, to fulfill His promises to us, to work out His sovereign plan, etc. But all these are subsets of His overarching purpose — to show Himself for who He is in all his beauty, perfection, and holiness.

If only we are willing to believe, trust, and and walk by what we know to be true and not by what we see or feel around us. Even if that means we feel like we’re just walking in circles when we actually are.

Have you ever had to wait to see God answer your prayers? Click here to share your story with a comment to help us all walk with more abundant faith.

Looters and Rioters Don’t Care About...
The Chorus In The Chaos
Related posts from FaithWalkers