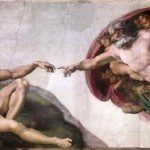 A February debate between scientist and evolutionist Bill Nye, “the Science Guy,” and creationist Ken Ham, president of the Creation Museum and Answers in Genesis, generated a great deal of attention.  It didn’t advance science. Nor did it shed light on or explore the legitimate place spirituality has in the daily lives of Americans.

Missing from the exchange was a much needed third voice – how faith, science and sometimes religion can be complements, especially in an age when spiritual hunger remains stronger than ever, though traditional worship, especially between four walls, is on the decline.

Instead, the debate underscored science’s confidence while inferring faith and religion are all too often fueled by superstition.  An inaccurate perception was reinforced of faith and religion’s inability to naturally balance logic and common science with belief in a higher, transcendental power.

Ham’s dogmatic insistence that the earth was created by a supreme being several thousand years ago prompted social conservative televangelist Pat Robertson to tell his 700 Club audience, “Let’s be real, let’s not make a joke of ourselves.”

Robertson added, “You go back in time, you’ve got radiocarbon dating … you’ve got the carcasses of dinosaurs frozen in time out in the Dakotas … giant reptiles were on the Earth, and it was before the time of the Bible.  So, don’t try and cover it up and make like everything was 6,000 years.  That’s not the Bible.”

One of the most conservative Christians made it clear – science has settled the question, but there is a minority who are unwilling or incapable of reconciling their faith with science.

Although Robertson didn’t venture into to this area, those fearful of reconciling belief and science, at least when it comes to the Earth’s age, suggest a fragile faith and reluctance to go beyond conditioning and comfort zones.  Incidentally, Robertson ignores science and the findings of internationally respected medical societies when it comes to homosexuality.

Faith, if dominated or interpreted through creationism, becomes a cult or superstition.  This loses the empowering elements of faith to draw the individual into a deeper experience and reflective conversation about being part of an ever unfolding universe.

In addition, science has its limitations.  It cannot explain the longing inherent in the vast majority of humans, even among atheists and humanists, to be connected with something larger then themselves.  Spirituality, broadly defined, cannot be reduced to an equation.

An individual, for example, is spiritually moved from within when hearing the beauty of Bach, Wagner, Scriabin, or Telemann.  These are experiences not understood through a calculation.  These are often feelings and experiences incapable of expression in print.  They are felt deep within.

Eastern Orthodox priest and theologian Alexander Men observed “a religious outlook cannot be intellectually justified except somehow on the level of evolution.”  Faith and how the universe developed are distinct.  An individual’s relationship with the Supreme Being need not be in conflict with analysis and scientific findings.

According to Fr. Men, “How the universe developed is of no consequence for faith, for my relationship [is] with God and … for my presence [or meaning] in the world …” Faith and science address two different areas, though one may overlap and encourage the other.

Priest, paleontologist and Catholic theologian Teilhard de Chardin wrote of the “elegant unfolding universe.”  He saw the “consciousness of each of us” as “evolution looking at itself and reflecting upon itself.”

It speaks to humankind’s collective and ongoing spiritual growth coinciding with Holy Sophia the Holy Spirit’s revelations shared over time.

This priest and trained scientist wrote, “Evolution assumes its true figure for our mind and our heart.  It is certainly not ‘creative,’ as science for a brief moment believed; but it is the expression of creation, for our experience, in time and space.”

Creationists have done an enormous disservice to faith and religion.  In addition, the un-Christian behavior of those who withhold Eucharist or are quick to judge others, though more comfortable with science, haven’t helped either in furthering the teachings of Christ to love more, judge less and build a community where all have an equal, respected place.

The Holy Author, or however one embraces or understands a higher authority, provided the ability to think, question, challenge, and explore.  Creationism is in conflict with these processes.

The Earth isn’t slightly older than 6,000 years old.  Science has definitively verified its billions of years old.  Adam and Eve, names in a teaching story about awakening, didn’t hunt, domesticate, or run from dinosaurs.

On the other hand, scientists inclined to be dismissive of a grand, supreme giver of life who may have started the Big Bang initiating evolution as we currently understand it, should be mindful that humankind has intuitively felt connected to something bigger than their self-interest.  Even cave men and women sought a primitive understanding of purpose and existence through a very basic spirituality.

In assessing the larger picture today, many religious leaders and institutional hierarchies don’t empower the spiritually hungry to feed themselves.  There’s still a power dynamic involved with threats of eternal damnation if submission and obedience is lacking.

Although traditional approaches to worship are changing, the nation could be poised for a spiritual reawakening grounded in logic, science and the unceasing, mystical yearning united with the ever unfolding cosmos.  The science-Creationism debate is pointless.

What’s relevant is the next chapter of faith and religion in the country and how spiritually hungry Americans are nourished.  What’s exciting is the spiritual revelation now unfolding for the new century.

Paul Jesep is a Corporate Chaplain, founder of CorporateChaplaincy.biz and author of “Lost Sense of Self & the Ethics Crisis:  Learn to Live and Work Ethically.”