Light! You will exist!

As a fresh-faced college student in Montréal, I decided to go explore the city that would be my home for the following three years. One of of the first things I happened across (yes, happened, I am terrible with maps) was the basilique Notre-Dame de Montréal. Beautiful though it was, the thing that caught my attention most was a sign hanging outside advertising a light show. The sign read “Et la lumière fut”. Whoa! I immediately realized that this was the French rendering of Genesis 1:3, which was way, way cooler than any English rendering I had come across.

In English, Genesis 1:3 is usually translated something like this: And God said “Let there be light,” and there was light. Boring. It almost sounds like God is a guy who walked into his house, realized that he couldn’t see because it was dark, and turned on the lights, thus making a dimly-lit room somewhat brighter.

The French is much more exciting. It goes like this: Dieu dit: Que la lumière soit! Et la lumière fut. So terse, and yet so packed with meaning! Let me break it down.

The first part, “Dieu dit:”, simply means “God said.” It does not have this clumsy “and” attached to it that clunks down the narrative. It’s written in the simple past, which gives it a definitive, over-and-done-with tone. God said it. Done.

But next, when God says “Que la lumière soit!”, the excitement involves more than the addition of an exclamation mark. This sentence is also written in the simple past and is best translated: Let light be! It doesn’t sound like God is saying, “Hey, it’s dark, let’s have some light, eh?” It is much more powerful. The simple past adds a degree of intensity; a second ago, light was not a thing. Now it is. Light was not. Now light is.

The last part follows similarly, “Et la lumière fut.” The verb “to be”, here conjugated as “fut”, does not often appear in the simple past. It is much more common to find it in the imperfect tense, which gives it an air of continuity. Usually, the verb appears as “était,” meaning something like, “I saw your sister, and she was mad.” Or, “when I was in college,  I was really bad at map-reading.” This tense indicates that the thing referred to in the past had no definite end. Your sister might still be angry. I am, in fact, still hopeless at reading maps. But the simple past denotes an action with a definite end. “The car was hit by the cyclist.” It happened. It’s over. This is the tense that French translations of the Bible here employ.

The French translation is based on the Latin, which goes: Dixitque Deus: Fiat lux. Et facta est lux. This is fairly equivalent to the French, but it itself comes from from the Hebrew, and at this point things get even more interesting. The Hebrew reads: way-yō-mer ’ĕ-lō-hîm; yə-hî ’ō-wr; way-hî- ’ō-wr. There are a few interesting things to take into account, but for us the most relevant thing are the verb translated “let there be.” In addition to possessing the temporal components of the French that I described above, this verb also has the character of a command. In Hebrew, God doesn’t just say “it would be nice for light to exist,” but, “Light! You will exist!” He commands light into existence.

So next time you’re reading Genesis, or hearing it preached in Church, keep that in mind. God did not simply make there be more of something already in existence. Nor did he merely cause the existence of something that did not yet exist. He had an idea called “light” and he commanded it to exist. Humans can make some things into other things. God, however, can imagine something that has never existed before and in His infinite power bring it into existence entirely by His command, totally under His control.

July 4, 2014 Our Independence Day
Recent Comments
0 | Leave a Comment
"bla bla bla. old or not. still works.no, wait. metaphysical pluralism still rules"
Sandro Wisdom Vasconcellos What We Are: Mind, Body, and ..."
"Soul is not matter. It is beyond the physical realms, It is at quantum mechanics ..."
Sandro Wisdom Vasconcellos What We Are: Mind, Body, and ..."
"This is yet another article that derails discussion of spiritual abuse into other very important, ..."
istavnit Overemphasizing Spiritual Abuse?
"I'm very interested in the matter of secularization; do you have other book suggestions along ..."
Luke Breuer Reading Recommendation: The Secular Revolution
Browse Our Archives
get the latest from
Evangelical
Sign up for our newsletter
POPULAR AT PATHEOS Evangelical
1

Steven Furtick is the Most Dangerous...
The Chorus In The Chaos
Related posts from Fare Forward 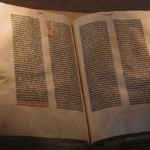 Evangelical
The Spirit and the Letter
Fare Forward