Rachelle Mee-Chapman is a former evangelical minister who now offers coaching and community to women who are are a little bit relig-ish. What does that mean, how did she get there, and what might her upcoming project mean to you? Read along and find out in this online interview. 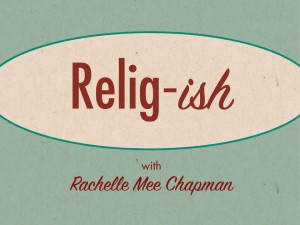 You were an evangelical pastor. For folks who don’t know you, tell us about your journey and where you are now!
I spent a lifetime in the evangelical branch of the church, and many years working to become a pastor even though I was (shock!) a woman! The senior pastor I was working with ordained me while the denomination I was a part of was actively debating whether or not they would allow ordination for women. He didn’t wait for the decision – he just did it! But the denomination decided upon a half-measure – each congregation within the denomination would determine for themselves if they would ordain women. Which meant that my ordination was recognized by my own congregation, but not by my regional overseer or by many of my pastoral peers.
At one point one of my mentors – another female minister in the denomination – lovingly said to me, “Rachelle, this battle is not going to be fully resolved in your lifetime. You have to determine if this is your fight, or not.” In that moment I felt something decisive drop in my chest. I knew then and there that I would not stay in traditional ministry. My work was not to reform the institution, but to provide shelter, healing, and welcome to people who were already driven out by intolerance and inequity. It took several years for my vision and will to catch up with that physical sensation of ending, but eventually I left the church as an organization, and struck out to re-imagine something new.

Now I lean on my pastoral skills to offer life coaching and spiritual direction to people who are curating their religious past and creating their spiritual present. I work with individuals, and I host Flock, an online soulcare community for women. We share our experiences and insights to help each other create right-fit spiritual practices that are rooted in our history, authentic to who we are today, and creative enough to grow with us. (I couldn’t be happier!)
What do you mean by “Relig-ish”?
I’ve long been curious about how it is acceptable within the Jewish community to be Jew-ish. Culturally, many Jews are allowed to hold on to their traditions and practices without having to be in perfect agreement with a set of creeds or doctrines. I was hungry for that kind of space – one in which I could honor my religious roots, but in a way that was authentic to my current beliefs and practice. So I took my cue from my Jew-ish friends, and became regli-ish.
When you grow up with a rhythm of faith – services, and seasonal holidays, repeated words and songs, and all the lovely rituals – it shapes you on almost a genetic level. If you leave the institution that houses that faith because your beliefs shift, or because the practices stop working for you, very often you will still long for all those rituals and rites. This is because those habits and traditions were designed to help you practice your core values in every day ways. And you are a person of values. So you stay hungry for them. You may be not religious any more, but you’re still a little bit relig-ish. Finding a way to curate and adapt those spiritual practices, traditions, and rhythms for this new relig-ish life is definitely in my wheelhouse!

Do you consider yourself a feminist? Why or why not?
I definitely do. I see so much inequality for women – in the church, in my own national culture, and globally. I really don’t see how anyone can say the need for feminism or the feminist movement is over. I have some male friends who are starting to bemoan the state of boyhood in America. “But what about the boys and they ways they aren’t allowed to be their fullest self?! Enough about feminism, let’s talk about the boys!” And I agree that we all need our culture to shift in order to allow each person to be their fullest self –regardless of their gender identify, or if they choose to align with a single gender identity at all! But the time has not come to stop speaking out specifically for equal rights for women and girls. When women are paid less than men, when traditionally women-held jobs are undervalued, when women pay for birth control out of pocket while men do not, when women are consistently being made to feel ashamed of their very own bodies –when these things are still happening, feminism is still an essential.
A lot of people, women especially, are finding themselves coming out of evangelical churches knowing that the patriarchal theology and misogyny is not right. What’s your advice for them?

The biggest surprise for me about moving out of a patriarchal setting was how deeply the misogyny had seeped into my bones. I wasn’t in the farthest right edge of the patriarchal church model – more in the middle or even a little to the left. But I still carry some its lies really deeply in my mind (affecting my thoughts) and in my body (affecting my health). Even though I’ve consciously rejected it, I’m still unravelling the messaging.
Just recently I was with my extended family, which is very conservative and patriarchal on one side, and all the women would clasp their (not at all low cut) tops to their chests, hiding part of themselves every time then bent over to pick up a spoon, or tie their shoes. Even the toddler girls were chastised for rolling around on the floor and showing their ruffled undies! And I thought, this, this is what causes the long term damage that we do not see. This constant messaging that our very selves are dangerous and shameful–the repeatedly reinforced idea that the simplest daily tasks are rife with sin and shame simply because of our gender.
When you are spoon fed “your body is naughty” from birth, it’s hard to flush that out. So my advice is to give yourself time to heal. Write mantras that tell yourself true things about who you are as a person – especially as a person with a body that is fearfully and wonderfully made. And if you get to place where you feel unexpectedly stuck or blocked in some part of your life, don’t be afraid to seek out help from a therapist or soulcare provider. It could very well be that some old messaging about your intrinsic value as a person if getting in your way. It’s okay to get someone to help you pack it up and move it out!

Pew Research keeps showing that the fastest growing religious affiliation in the U.S. is “unaffiliated” (the so-called “nones”). What should people know about the “unaffiliated” Relig-ish folks that you are working with? What would they want more people to know about them?
It’s a large and varied group, so I can’t speak for everyone. But I can say that most of the folks I work with would cringe at being called “None’s.” Being referred to as “None” indicates a zero, a goose egg – that we practice nothing, believe in nothing, commit to nothing. And for the subset of “unaffliated” people who are becoming relig-ish, nothing could be further from the truth.
There is a popular thought out there that being spiritual but not religious is not enough. There’s a huge assumption that people who practice their values and beliefs outside of an institution are just “sunset gazers.” In reality, it takes a lot of work to create right-fit spiritual practices for yourself and your family—and doing so is healing and fulfilling. You have to curate, and research; experiment, fail, and try again. And most of us have to do so without a supportive community around us. The “unaffiliated” and “nones” are some of the most dedicated spiritual practitioners I know. I suspect that calling us spiritual lightweights is born more out of fear that the status quoa of the church will be upset, than out of any kind of factual assessment of who we are as individuals, or as a movement.

Tell us about your book project, Becoming Relig-ish. What’s it about and who is it for? And how can people support it?
Whether you are leaving church, or trying to find a comfortable place to be your authentic self within the institution – there’s a lot of re-formation to be done. And after more than a decade of writing about spiritual shift I’m finally able to write a guidebook for people who are becoming relig-ish—if I can raise the rest of my advance on Kickstarter.
As a woman in ministry, I spent a lot of years working for free, or for unlivable wages. As an artist-writer, I’ve done the same. (So much burnout!) I knew if this book was going to get born, it had to have the right kind of support. So my publisher, Chalice Press, and I worked up a creative idea. I would sign a provisional contract that provided a portion of my writer’s advance and write the book if I could raise the rest of the advance I needed on Kickstarter. So together, we are turning to like-minded folks to pre-order the book or pledge other amounts between now and the end of June.
There’s this great line from the film “Who Does She Thinks She Is,” where one of the women says “I’m alone. I’m in the forest. And I hear wolves.” I don’t think people should have to be alone in the forest of spiritual shift. Becoming Relig-ish will be there to give you a map, and to hold your hand while your travel to your right-fit form of faith. If that’s appealing to you, you can learn more at http://bit.ly/religish