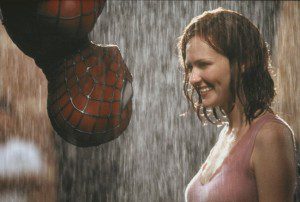 The fans have waited nearly 40 years for a big-screen adaptation of the Spider-Man comic book, and for the most part, Sam Raimi’s film does not disappoint.

Tobey Maguire is very impressive as Peter Parker, the teen-aged wimp who acquires great strength, super reflexes, and the ability to climb walls and spin webs after he is bitten by a genetically engineered spider; even after he wakes up with a buff new bod, he still has the beaming grin and nervous demeanor of a high-school geek.

Raimi, working from a screenplay credited to David Koepp, powerfully captures the moral issues at stake as Peter grows into the web-slinging super-hero; unlike Superman, whose parents merely died in a planetary accident, and unlike Batman, who witnessed the death of his parents and took up crimefighting as a form of revenge against criminals in general, Spider-Man fights crime almost as a form of atonement, after his Uncle Ben (Cliff Robertson) is killed by a felon that Peter could have captured but, for reasons of pride, chose not to. As one columnist has put it, “Spider-Man devotes his life to fighting wrongdoers, knowing he is one himself.” Willem Dafoe also has some riveting moments as Harry Osborne, the techno-tycoon who goes mad and becomes the villainous Green Goblin.

Unfortunately, the film is marred by overly expository dialogue, shallow supporting characters, unconvincing CGI effects, and a few excessively campy moments. It’s great that Peter’s Aunt May (Rosemary Harris) is portrayed as a devout Christian, but you wish the character wasn’t so two-dimensional; still, the film does underscore the fact that Spider-Man’s sense of responsibility is traceable to his upbringing, and if faith has played a part in that, then so much the better.

— A version of this article was first published at the website for BC Christian News.

May 16, 2002 Review: Star Wars: Episode II: Attack of the Clones (dir. George Lucas, 2002)
Recent Comments
0 | Leave a Comment
"Mark 3:21, 31: "When his family heard about this, they went to take charge of ..."
Peter T Chattaway The Chosen starts shooting its second ..."
"Where do you get the idea that Jesus' mother and brothers were there to intervene ..."
tmirus The Chosen starts shooting its second ..."
"This was a refreshing read. I'm an average fan of Hellboy but I'm also a ..."
Andrew Mathews Doug Jones on Hellboy and Christianity.
"Great interview! One thing I've wondered since watching Season 1 is why they didn't include ..."
A.J. Cattapan Interview: The Chosen writer-director Dallas Jenkins ..."
Browse Our Archives
get the latest from
FilmChat
Sign up for our newsletter
POPULAR AT PATHEOS Entertainment
1