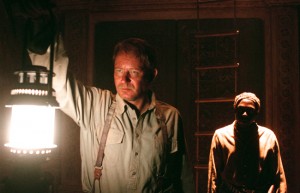 It is almost impossible to imagine that a worthy sequel to 1973’s The Exorcist could ever be made, but that hasn’t stopped several filmmakers from trying. The original film — directed by William Friedkin from a screenplay by William Peter Blatty, who also wrote the original novel — was more of a mood piece than a story. The demonic possession of a 12-year-old girl was less a conflict to be resolved than a hook on which to hang a thoughtful meditation on the tension between modern materialistic science and an ancient, even primitive, belief in a spiritual realm beyond this life. At a time when many were asking if God was dead, and if concepts such as goodness still had any meaning, Blatty and Friedkin hit audiences with a bold, shocking depiction of evil and dared them to say that this, too, was not meaningful. If there truly was such a thing as evil, then there truly must be such a thing as good, too; and if the Devil existed, then so did God.

Admittedly, The Exorcist had some elements which, if pressed too hard, would have taken the story in the direction of pure hokum. And press too hard is, alas, exactly what the sequels have done. John Boorman’s Exorcist II: The Heretic (1977), widely regarded as one of the dumbest movies ever made, tried to fill in all the gaps in the first film that were wisely left unfilled; among other things, it also abandoned the first film’s realistic depiction of modern mechanized medicine in favor of tacky sci-fi elements such as a mind-reading device that consisted of a couple headbands, a few wires, and a pulsing light bulb. The Exorcist III (1990), directed by Blatty and based on his 1983 novel Legion, spun a serial-killer murder mystery in which possession was little more than a plot device.

And now there is Exorcist: The Beginning, which could just as easily be called Exorcist: The Epic. This film was originally assigned to Paul Schrader, a graduate of Calvin College who has wrestled with his Christian upbringing in films as varied as The Last Temptation of Christ, which he wrote, and Hardcore, Light of Day and Touch, which he directed. Schrader has said that he wanted to make The Beginning a psychological, character-driven period drama, but the studio reportedly wanted more blood and gore, so it took the film out of Schrader’s hands after he had finished it and hired Renny Harlin (Die Hard 2, Cliffhanger) to remake it, almost from scratch. And Harlin gives the studio what it wants right from the opening frames, as a Byzantine priest wanders through a computer-generated sixth-century battlefield strewn with corpses, severed body parts, and upside-down crosses.

The film then jumps to the 1940s, where we meet Lankester Merrin (Stellan Skarsgård, as a younger version of the Max von Sydow character from the first two films). Merrin is a priest who has lost his faith because of the atrocities committed against members of his parish during the Nazi occupation of Holland, and he has fled his home in a vain attempt to get away from his memories. He is in Cairo when he is approached by Semelier (Chariots of Fire’s Ben Cross), a British collector of rare antiquities who knows of Merrin’s training in archaeology, and who asks Merrin to lend his expertise to an unusual excavation in Kenya.

It turns out the British have discovered a 1,500-year-old Byzantine church in a region where there shouldn’t be any; what’s more, the church seems to have been buried by natural forces as soon as it was completed, the head archaeologist has gone insane since climbing into the church through a hole in its dome, and the local village is rumored to have been struck by a plague just a few decades ago, the last time explorers came calling. And no sooner has Merrin arrived than hypnotized hyenas begin to attack the children and pregnant women begin to give birth to stillborn babies covered in maggots, while tensions between the British soldiers and African tribesmen also begin to boil over…

Yes, there’s an evil spirit out there somewhere. But whereas the first film concerned a very specific case of demonic possession, and whereas Blatty’s original story reflected his extensive research into such phenomena, this new film shows the same demon throwing its weight hither and yon as the film throws together a wide range of elements that feel like warmed-over horror-movie clichés, from insects crawling out of people’s mouths and sandstorms descending on entire villages to the spontaneous, and telekinetic, breaking of the bones of some African tribesmen who are trying to cast the demon out of their presence.

But until the film’s final half-hour, the demon’s presence itself barely registers. Whereas the symptoms of demonic possession kept escalating over the course of the original film, they are almost nowhere to be seen in the new film; an African boy’s bed shakes violently every now and them, but after a while you begin to wonder why he hasn’t started spitting or vomiting or barking obscenities. The reason becomes clear when a certain plot twist comes along near the end of the film, but while plot twists of this sort may be acceptable in, say, a Harry Potter movie, they are not what The Exorcist is, or should be, all about.

To be fair, Exorcist: The Beginning makes a few nice visual nods to the original film, and its references to World War II are actually very much in the spirit of the novel, which briefly cites the Holocaust, the Vietnam War, the persecution of Christians under the Communists and similar examples of real-world cruelty, as if to say, Why do we need a “sign” such as demonic possession in order to believe that evil is real? The new film’s exaltation of Christian ritual, belief, and submission to God over such occult practices as the reading of tarot cards is also quite commendable. But the new film misses the point, when it reduces Merrin’s confrontation with the demon to a set of comic-book heroics. In the first film, exorcism is presented as a stressful and prayerful activity requiring patience and diligence, and we are told that the exorcism Merrin performed in Africa some years ago took “months”; but in the new film, it’s all over in an evening of special effects.

Making a sequel to The Exorcist may ultimately be about as pointless as making a sequel to the Book of Job. While I certainly wouldn’t put Blatty’s novel or Friedkin’s film on the same level as Scripture, one thing these stories do have in common is that they deal with very challenging themes — the problem of suffering, the crisis of meaning in the modern world — and they invite deeper contemplation through re-reading, or re-viewing (at least for those who can stomach the more shocking elements in Friedkin’s film). It might very well be interesting to make a film about Father Merrin’s earlier experiences with demons, just as it might very well be interesting to dramatize the thoughts and feelings of, say, Job’s children, but neither of these exercises is likely to shed any light on what the original story was all about. Some things are better left mysterious, and some movies better left unmade.

1. C. S. Lewis said, in The Screwtape Letters, that demons want us to either not believe in them or to be inordinately fascinated with them. How do you think Christians should respond to movies about demons? How would a movie deal with the subject responsibly? Do our responses to these movies differ from our responses to biblical stories about exorcisms? If so, how?

2. Why do you think there is so much evil in the world? Is it all due to demonic activity? How much responsibility do you think we humans have for the evil we commit?

This film is rated R for “strong violence and gore, disturbing images and rituals, and for language including some sexual dialogue.” There are many scenes of people being slashed, speared, shot, and so on, and some of these wounds are self-inflicted; also, some people’s bones are broken by invisible forces, and a woman gives birth to a stillborn baby covered in maggots. There is a brief hint of nudity when a woman takes a shower. Plus there is some rough language, especially where a lusty old man is concerned. Take the R rating seriously; this is not a movie for kids. Adults will want to be wary too, considering the content.

September 30, 2004Star Trek: Generations: the two-disc DVD
Recent Comments
0 | Leave a Comment
Browse Our Archives
get the latest from
FilmChat
Sign up for our newsletter
POPULAR AT PATHEOS Entertainment
1 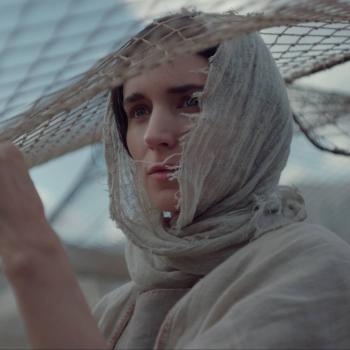 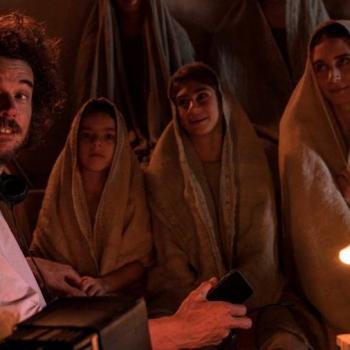