The Church Behind Fireproof / How a Baptist church in Georgia became a movie-making mecca September 1, 2008 Peter T. Chattaway 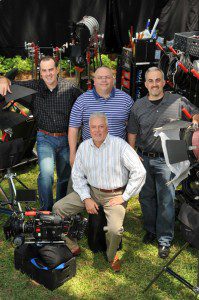 For several years the members of Sherwood Baptist Church have had a vision: “To touch the world from Albany, Georgia.”

Through its media ministry, the church has already produced two feature-length films with an all-volunteer cast and a mostly-volunteer crew. Given their incredibly low budgets, both films — especially Facing the Giants — have been enormously successful, in theaters and on DVD. Both films have also been distributed to over 50 countries around the world in a dozen subtitled languages.

Now the church is putting the finishing touches on its third film, Fireproof, which opens on September 26. This time the folks at Sherwood are working with a budget of $500,000 — still peanuts by Hollywood standards, but five times the budget of Giants — and they even have a professional Hollywood actor, Kirk Cameron of Growing Pains and Left Behind fame, in the lead role as a firefighter whose marriage is in trouble.

But one thing has remained constant: the church’s commitment to treating movies as ministry, rather than just a safe form of entertainment.

“The movies are one aspect of what we do,” says Michael Catt, senior pastor at Sherwood and an executive producer of the films. “We have church on Sunday, and we have discipleship and missions work, and youth and children’s ministries, and singles ministries, and the movies never depict all of what we are about. But they are an arm, if you will, of ministry, that is unique within the total ministry of the church.”

Make movies? Why not?

It all began in 1999, when Sherwood appointed Alex Kendrick to be its new media minister. Two years later, his brother Stephen came on board as an associate pastor. Around that time, the Sherwood pastors went on a staff retreat to Florida and took a day off to visit Disney World. There they talked about the possibility of making movies themselves, as a branch of their ministry.

Catt asked Alex what his passion for the future was and where he wanted to be a few years down the road. Alex — who had made some commercials and other short videos prior to joining Sherwood — replied that he wanted to make movies but didn’t think a church would let him. “Why not?” Catt replied, and within a year of that conversation, they were working on their first full-length film, Flywheel.

Produced on a shoestring budget of $20,000, the film starred Alex — who also directed and wrote the script with his brother — as a used-car salesman who swindles a pastor. He then has a crisis of conscience when that pastor, unaware of his treachery, asks God to do for the salesman what the salesman did for him.

Alex laughs, now, when he recalls how inexperienced he and the others were. “We’d drive over to Home Depot to buy our lights, and we’d start aiming them until it looked halfway decent, but Flywheel was very low in terms of production values,” he says. “It should not have happened. The movie should not have worked.”

But work it did, despite the odd calamity or two. The church had already booked a local theater for the premiere when the hard drive containing all the edits was accidentally destroyed only a couple weeks before showtime. Then the church’s music minister lost the music files that he had recorded for the soundtrack. The Sherwood team worked round-the-clock for ten days to put the film back together, and finished the job a mere five and a half hours before the first matinee.

Much to their surprise, the film was a local hit, and played for six weeks in Albany, plus several weeks in other towns. The film proved even more successful after Sherwood released it on DVD, in a two-disc set complete with bonus features. And Sony released a slightly shorter “director’s cut” last year through its Provident label, which is geared to the faith-based market.

“I remember thinking it would be great if we sold a thousand DVDs, and now we’re over 150,000 DVDs, just on that film,” marvels Alex. Stephen notes that although there was little promotion for Flywheel, “word of mouth has so carried that baby.”

Then came Facing the Giants, which depicts a high-school football coach struggling with a losing team, the possible loss of his job, and various problems at home before God intervenes. The film became a national cause célèbre when word got out that the MPAA ratings board might have given it a PG rating, rather than a G, because of its evangelistic elements.

Pundits raged. Members of Congress threatened to investigate the MPAA for possible anti-Christian bias. And the film capitalized on the free publicity by opening in over 400 theaters and grossing over $10 million — a total bested by only a few independent Christian films, all of which had much, much bigger budgets. The film has since gone on to sell about 1.5 million copies on DVD, says Catt.

As per standard industry practice, most of the money remained with the theaters or with Provident, which distributed and marketed the film. But the church did get a small cut; they refuse to say how much, but it was enough to allow them to move ahead faster than expected on an 82-acre sports park — complete with baseball fields, tennis courts, a fishing pond, and an equestrian center — open to the wider community of Albany.

“One of our goals is to use that [park] to reach into the community,” Catt says. “Especially to try to touch underprivileged families — kids that would never get to ride a horse, kids that would never get to go fishing anywhere — so that their grandparents can take them fishing on our sports complex. It’s not a facility just for our church family, it’s a facility for our church family to minister to our community.”

Now comes Fireproof. And despite having a bigger budget and a celebrity as their leading man, the new film has been made with a mostly volunteer cast and crew, just like the first two movies. Even Kirk Cameron agreed to work for free, suggesting that Sherwood instead make a donation to Camp Firefly, his non-profit camp for terminally ill children.

Catt estimates that as many as 1,200 churchgoers volunteered on the film at some point, including those who brought food to the set or babysat the filmmakers’ children while the project was in production. Alex says the experience has “built morale among our church members, doing something as an entire body.”

And because these films are intended as ministry, Stephen says it is very important that everyone involved be on the same page spiritually. “We’re not just making a movie and trying to slap the Christian label on it. This is a ministry for us, and we’re asking God to bless it with his favor. How can we ask God to do that if we’re not giving everything to him, trying to do everything with integrity?”

To that end, every movie has begun with “a season of prayer,” says Alex. “Although Stephen and I have seven more ideas for movies, we will go into a season of prayer for weeks or months at a time. We’ll start asking, ‘Lord, would you show us what direction you want us to go?’ and in all three cases of the movies we’ve shot so far, he has made it pretty clear.”

In the case of Fireproof, the Kendricks felt compelled to make the film because they kept hearing, from pastors and others, that people needed help keeping their marriages together. “There was a sense of rightness about it,” says Stephen. “We’d batted around so many different story ideas, but we kept coming back to the difference between a good idea and a God idea, and we needed the one that we could tell had God’s finger on it.”

To make sure the message of the movie reaches beyond the theater, the folks at Sherwood are planning a variety of ministry tie-ins. The Kendricks are writing a book based on “The Love Dare,” a series of recommended actions that Cameron’s character takes in an effort to keep his marriage together. There’s also talk of creating an eight-week Sunday school or Bible study course on “fireproofing your marriage.” In addition, over 20 marriage ministries have endorsed the film.

The world comes to Sherwood

Just as this church in Albany has been able to reach out to the world, the world has begun to check out this church in Albany, with tourists passing through Georgia making slight detours to see the place where these movies have been made. Catt says the experience has been fun for Sherwood members, who hear stories of how their movies have touched other peoples’ lives.

And what would the folks at Sherwood say to someone who was thinking of starting a movie-making ministry at their own church?

Make sure it’s what God wants you to do, says Stephen.

“We’ve told people, ‘Just because our church made a movie and it worked, it doesn’t mean God’s calling you to make a movie,'” he says. “One of the worst things that could happen is if every church out there tries to make a movie. If God hasn’t called them to do that, they’re going to be spinning their wheels.”

Alex concurs. “Our goal was to encourage churches to delve into media or the arts, whether it’s live drama or singing or music or whatever. But what we don’t want is 200 poorly done $10,000 movies out there,” he says with a laugh.

Catt says it’s vital for a church to have great team spirit when considering whether to make a film. “You really have to lay your ego down. When you’ve got people auditioning, and they’re sitting in the same section of the church as someone who maybe beat them out for the part, you’d better have a dead ego or it could really cause problems.

“It’s not about us. It’s about the ministry we’re trying to do. And I think prayer and unity are key.”

Peter T. Chattaway is a film critic for ChristianityTodayMovies.com.

— A version of this article was first published in Today’s Christian.

August 30, 2008
Dark City and the ambiguous ending.
Next Post

September 1, 2008 Indiana Jones and the Deadly Blather / Notes on the devolution of a franchise.
Recent Comments
0 | Leave a Comment
"This was a refreshing read. I'm an average fan of Hellboy but I'm also a ..."
Andrew Mathews Doug Jones on Hellboy and Christianity.
"Great interview! One thing I've wondered since watching Season 1 is why they didn't include ..."
A.J. Cattapan Interview: The Chosen writer-director Dallas Jenkins ..."
"Earth actually does exist in the Dark City universe. Early in the film when John ..."
Edward Clint Dark City and the ambiguous ending.
"I don't always agree with your opinions, but your reviews are never less than interesting ..."
Laura-Lee Rahn The top-grossing Italian movie of 2019: ..."
Browse Our Archives
get the latest from
FilmChat
Sign up for our newsletter
POPULAR AT PATHEOS Entertainment
1