Interview: Chad and Aaron Burns (Beyond the Mask, 2015)

Filmmaking is a family affair for many writers, directors and producers. One thinks of the Coens, the Wachowskis, the Farrellys, and other siblings who collaborate on films. This phenomenon extends even to the Christian filmmaking subculture, with fraternal teams like Alex and Stephen Kendrick (Courageous), Bobby and Kevin Downes (The Moment After) and Jon and Andrew Erwin (Moms’ Night Out).

Filmmaking is a family affair for Chad and Aaron Burns, too — but the director and producer of Pendragon: Sword of His Father and Beyond the Mask, the latter of which opens in Canadian theatres this week, have gone about things a little differently. For one thing, they are cousins, not brothers.

“We decided to go the cousin route this time,” says Aaron in a phone interview. “I’m from Detroit, and I still live in this area, and Chad is from the St Louis area, but as kids, our families would get together and play in the back yard or whatever.

“Our filmmaking career kind of started almost accidentally. It’s a long time ago now, but we were just shooting movies in the back yard with the family video camera. So over the next several summers, we were just telling stories for fun, filming them, and then I was going off to college, and I said, ‘Hey, let’s make a feature film,’ and that was our first film, Pendragon, which was an all-volunteer effort.”

Released in 2008, Pendragon — a riff on Arthurian legends set in 5th-century Britain — won the ‘Best Family Picture’ award at the Oklahoma-based Bare Bones International Film Festival, which celebrates independent films with budgets of less than $1 million. Encouraged by their experience on that film, the Burns cousins decided to make another period piece, albeit one that’s a little closer to home this time.

Beyond the Mask, a swashbuckling action film that takes place in the 18th century, concerns a mercenary who teams up with American revolutionaries against his former bosses in the British East India Company — partly to win the love of a woman, and partly out of a larger bid for redemption which, of course, he learns he cannot achieve without committing himself to something larger than himself.

“Thematically, we felt the Lord leading us to deal with this matter of identity, where we find our sense of self, our sense of worth, our sense of value,” says Chad. “And not only that, but how do we overcome the evil that we find inside of our own hearts?

“So it’s a story of a guy with a really bad past, and he’s got some stuff he doesn’t like about who he is and what he’s done, and he wants to change that, and he goes through kind of a two-step process of trying to change.

“The first step, he tries deception, and he literally puts on a disguise, in this case the assumed identity of a vicar, a good man, but that good identity, that lie, can never fix the underlying problem. So that’s exposed.

“And then in the second beat of the story, our hero says, ‘Well instead of just lying and pretending to be a good person, what if I can actually do enough good deeds to balance the scales of justice, and to earn my way back to the kind of respect that I want from this girl?’ And so he really sets out on a quest to try and balance the scales. And that also fails him.

“And the basic message of the Christian gospel is that we ultimately can’t save ourselves. The problem that we have is so deep inside of us, with our broken heart, that we need outside help — and that comes in the form of a Saviour, and that’s Jesus Christ.

“And so our hero finally realizes that, through deception or through good effort, he can’t save himself, and he comes to a point where, standing in the wreckage of his own best efforts, he encounters the grace of Christ.”

The film was produced with grassroots support, including a Kickstarter campaign that gave them the seed money for meeting with writers and investors, as well as a record-setting theatrical-on-demand campaign that saw the film play in over 400 theatres in the United States in April, followed by a regular theatrical release in June.

Aaron says the film had a $4 million budget overall, but half of that came in the form of donations-in-kind.

“We just saw this incredible outpouring of love and enthusiasm from people who believed in it and said, ‘Listen, we want to see this kind of movie made, an action-adventure story that’s a fun story to watch, but woven throughout it are these clean family values and then in addition to that has a gospel-centred message.’ So it’s kind of a unique film in that way, and a lot of us produced it through a very unique system as well,” he says.

The money and the effort are certainly on screen: Beyond the Mask has some pretty good production values for an independent faith-based fim. Chad notes that there are 700 visual-effects shots in the film — to put that in perspective, the original Star Wars had a then-unprecedented 360 effects shots — because the story is set 240 years ago and the filmmakers had to recreate a world that no longer exists.

“There are hundreds of period costumes that were hand-sewn for the movie,” he adds. “The entire audio design, every single layer, probably every single exterior sound, it all had to be constructed from the ground up, from scratch, because you can’t just take a microphone out on a street corner and get sounds that are going to work for a period piece. So this movie has really benefitted from a huge team of people that have come together to create that period experience.”

The film also benefitted from some convenient, cost-saving locations. While the film is set in and around certain historical landmarks in the Philadelphia area, it was actually shot in the Detroit region — because there are little-known replicas of those landmarks in Detroit.

“Here’s what’s so crazy,” says Chad. “Henry Ford and the other auto barons of the last century made a lot of money, and they had to do something with it, so it kind of became a fad to reconstruct period buildings. So the auto barons literally went over to Europe and just picked out manors and had their architects rebuild them in the Detroit area.

“We shot at two huge mansions that are modeled off the European continent from the 1700s, that were rebuilt in Detroit. So that was the first thing.

The cousins had help in the creative department, too. The script was co-written with Paul McCusker, who produced Focus on the Family’s Adventures in Odyssey radio series, and Stephen Kendrick — who, together with his brother Alex, has had one of the most successful streaks at the box office in Christian-movie history.

When I mention that I interviewed the Kendricks once, and was struck by the enthusiasm with which Stephen explained some of the low-budget tricks that he and his brother used in films like Fireproof, the Burns cousins concur that he was an energizing presence on the set of their own film.

“He’s really been a mentor to us,” says Aaron, who is also one of the associate producers on the Kendricks’ next film, War Room (which opens August 28). “Just such a strong man of faith, and a man of courage, and such a fun, high-energy personality.”

The cousins also scored a casting coup when they got John Rhys-Davies — of Indiana Jones and Lord of the Rings fame — to play the lead villain. (I interviewed Rhys-Davies last year on the set of Killing Jesus, in which he played one of the high priests.)

“Oh, man, that was huge,” says Aaron. “A couple months before we officially launched the casting, I sent Chad an e-mail with a picture of John Rhys-Davies dressed in period costume and said, ‘Wouldn’t this be fun?'” Their casting director said, “Well, let’s send him a script and see what happens,” and the rest is history.

The Burns cousins are already thinking about their next feature — Chad says they are “leaning” towards making another period piece — but first they have to finish distributing and promoting Beyond the Mask.

So: with the film coming out in Canada this week, what’s the pitch for Canadian audiences, given that this country was on the other side of the American Revolution?

— Beyond the Mask opens in Canadian theatres August 14 and comes to DVD and Blu-Ray September 8.

Chad Burns and Stephen Kendrick on the set of Beyond the Mask: 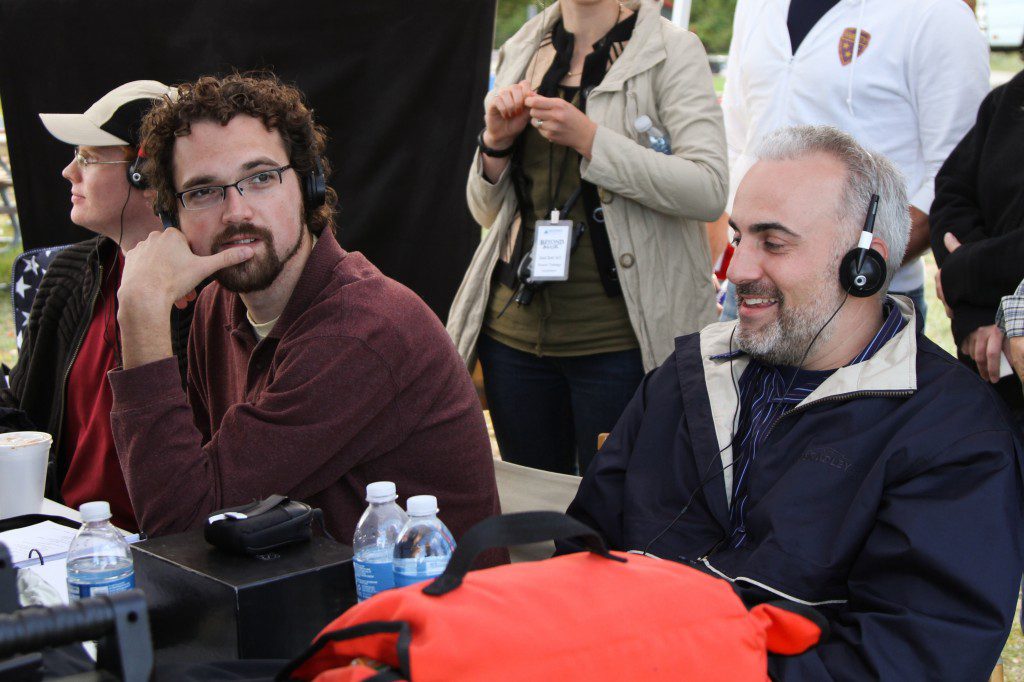 John Rhys-Davies with the Burns cousins on the set of Beyond the Mask: 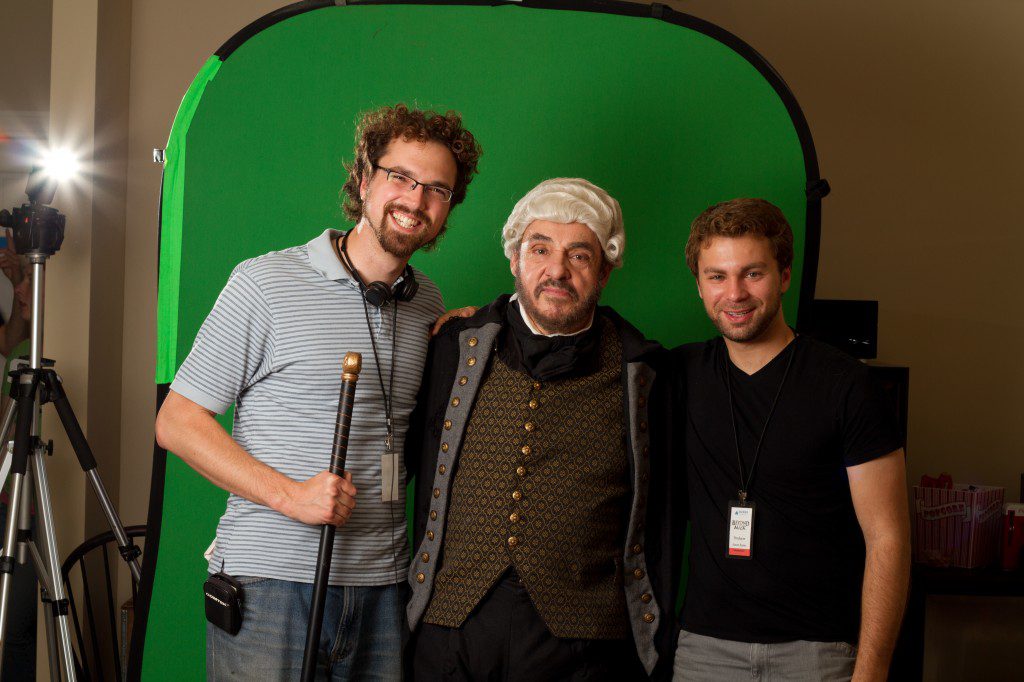 August 9, 2015
Life of Brian and the Jesus film were distributed by the same company to the same theatres at the same time.
Next Post

August 17, 2015 Ray Winstone on family, politics, and that injury he got while playing King Saul in Of Kings and Prophets
Recent Comments
0 | Leave a Comment
Browse Our Archives
Follow Us!