Yet another mini-series about Jesus now in the works.

Yet another mini-series about Jesus now in the works. March 27, 2013 Peter T. Chattaway 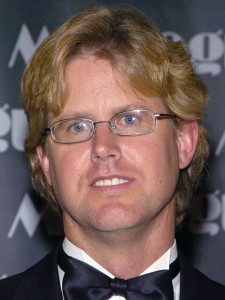 So, while I was polishing off my last couple of Jesus-themed posts, the Hollywood Reporter posted a story to the effect that yet another mini-series about Jesus is currently in the works.

The projected six-hour mini-series is called Jesus of Nazareth, and is not to be confused with Franco Zeffirelli’s 1977 mini-series or the film that Paul Verhoeven has been talking about making for decades (and which, according to the Reporter, is currently stalled for lack of a screenwriter).

The new mini-series is currently being developed by Michael Landon Jr. (pictured) and producer Brian Bird, who have collaborated on a number of Christian films. (My negative review of one of them touched off a firestorm of controversy — very little of it directly involving the filmmakers themselves, I’m happy to say — just over six years ago.)

Here is how they described their new series to the Reporter:

Says Bird: “We’re not looking to cause controversy to anybody. What we hope to do will be orthodox and faithful to the gospel and pleasing to whoever sees it. The idea of helping skeptics see Christ in a different way than they’ve ever seen him before, that’s not going to upset the choir.”

The mini-series does not yet have a network attached to it, so it remains to be seen whether this will be a nationwide hit like The Bible or end up in limbo like that recent remake of Ben-Hur, which played in a few countries overseas after premiering in Canada but has, to my knowledge, never been broadcast in the United States.

March 27, 2013
Newest version of Christ Recrucified gets a title that is more upbeat, more friendly to "faith-based audiences"
Next Post

March 29, 2013 Richard Griffiths: The link between Tarzan and Harry Potter.
Recent Comments
0 | Leave a Comment
""AD" stands for "Anno Domini", a Latin expression meaning "In the Year of Our Lord".So ..."
Peter T Chattaway The Chosen — season one, episode ..."
"Why does it say at the start of episode 3 that it takes place 26 ..."
Desiree Chamberlain The Chosen — season one, episode ..."
"What about Hellboy, The Grudge, Ghoulies, and Anaconda?"
45th Spiderbob Group VGCP When R-rated franchises go PG-13 …
"Not yet, but I might do something like that once Season 2 is complete."
Peter T Chattaway The Chosen — season one scripture ..."
Browse Our Archives
get the latest from
FilmChat
Sign up for our newsletter
POPULAR AT PATHEOS Entertainment
1