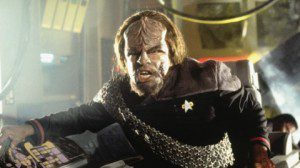 It’s been a while — over 20 years, arguably — since the last time a big-screen movie composer had to write some new music to represent the Klingons, but the wait will soon be over, if the Star Trek into Darkness soundtrack samples that Michael Giacchino posted to his website last week are any indication.

The track titles on Giacchino’s scores tend to be a little punny, and the newest score is no exception, as one of the tracks from his latest Star Trek score is called ‘The Kronos Wartet’. This is an amusing reference to the four-piece string quartet known as The Kronos Quartet, but it is also a reference to the Klingon home planet Qo’noS, the name of which is apparently spelled “Kronos” in this film.

Before I comment on the sample itself, I’d like to take a step back to look at how the Klingons have been treated musically in previous films, going all the way back to the very first film in the franchise, Star Trek: The Motion Picture, released in 1979. 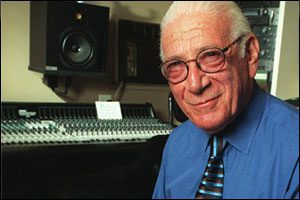 The score for that film was written by Jerry Goldsmith, who would go on to score four of the next nine Star Trek films as well as write the theme music for Star Trek: Voyager (1995-2001); his theme music for the original film was also used as the theme music for Star Trek: The Next Generation (1987-1994). And practically the very first thing we heard in the first film, once the basic Star Trek theme had played over the opening credits, was a special theme he wrote for the Klingons (note: you may have to open some of the music tracks below in new tabs or windows in order to hear them):

The Klingons had often antagonized Kirk and company during the original TV series (1966-1969), but in the first film, the Klingons make no contact with our heroes; instead, three Klingon battle cruisers encounter a mysterious entity called V’Ger, and, after firing some torpedoes at it, they are quickly destroyed by it. But even though the Klingons were not the villains of this particular film, Goldsmith made it clear in an interview that he wrote the Klingon music with “bad guys” in mind.

From the liner notes to the three-disc soundtrack album released last year:

Goldsmith provides one of his most exciting pieces of music for “Klingon Battle.” Suggestions of the primary theme for V’Ger swell while crackling stings from the blaster beam accentuate the V’Ger cloud and its attacking energy bolts. But the fiery Klingon material dominates the cue with ferocious energy and avant garde, rhythmic strings.

“The Klingon thing was instinctual,” Goldsmith revealed. “I knew that there was a barbaric quality about them, a primitive quality, and they were the aggressors…I did want to get that into the music, and that was the sum of the intellectual rationalization. I guessed they were the bad guys and they were attacking, so I figured we needed a battle cry for them.”

Goldsmith’s repeating open-fifth figure for the Klingons revived an idea he had utilized in many scores over his career. With an accompaniment of plucked and col legno strings and angklungs, Goldsmith’s Klingon theme (played first by oboes, English horn, bassoons and tenor saxophone, and later by brass) establishes an aggressive, tribal atmosphere for the warlike characters.

Goldsmith’s Starfleet motive pumps busily underneath swirling glissandi and chirping synthesizer effects to characterize the Epsilon Nine communications array before the climactic bursts of Klingon music — the overpowering blasts of the beam and a burst of chaotic material underscoring the “digitization” of the remaining Klingon ship.

Note how the Klingons were perceived at this time as “barbaric”, “primitive”, “tribal” and “warlike”. Consider also that this film marked the first time that the Klingons were depicted as the hairy, ridge-browed creatures that we now know and love; prior to this, the Klingons had been devious schemers, but were basically human to all outward appearances (so much so that one Klingon even went undercover as a human in ‘The Trouble with Tribbles’). So the film’s make-up department pushed the Klingons in a more animalistic direction, and the music followed suit.

Goldsmith did not score another Star Trek movie until William Shatner hired him for Star Trek V: The Final Frontier (1989) ten years later — and since one of the film’s main subplots involved a Klingon named Klaa who wants to kill Kirk for fame and glory, Goldsmith was able to use the Klingon theme again in a more action-oriented mode. Here is the music that ushered the Klingons into that film:

And here is how the liner notes to the two-disc soundtrack album released a few years ago describe this track:

Goldsmith’s “turbine” glissando and a blast of the Klingon theme play under the image of a decloaking Klingon bird-of-prey. As Captain Klaa (Todd Bryant) and his first officer Vixis (Spice Williams) discuss using the Pioneer 10 probe from Earth for target practice, bells and various other forms of percussion (including anklungs, and knuckles striking the bottom of a piano) pulse against the Klingon theme on brass.

The Klingon theme pops up a few more times during the action sequences, but one of my favorite uses of it here — because it is so brief and subtle — comes at the 3:44 mark during the track below. For the most part, this track concerns the journey that Kirk, Spock, McCoy and Sybok make towards Sha Ka Ree, the “God planet” — so the music has a sort of mystical-yearning quality — but the Klingon theme comes up very briefly when Klaa’s bird-of-prey shows up on a monitor that goes unnoticed by the Enterprise bridge crew, all of whom are watching Kirk’s journey on the viewscreen:

So, since a Klingon is out to get Kirk in this film, that must mean the Klingons are the “bad guys” again, right? Sort of. But this film was made two years after the premiere of The Next Generation, which took place roughly 80 years after the events of this film and established that the Klingons and the Federation would one day be allies, and indeed that a Klingon would one day serve on the bridge of the Enterprise itself. And so, by the end of this film, Spock persuades a disgraced Klingon general to assert his authority over Klaa, and to use Klaa’s bird-of-prey to save Kirk.

And thus, the Klingon theme appears again, in a very triumphant register (starting at the 0:37 mark in the track below), when the bird-of-prey destroys the “God” alien that has been pursuing Kirk. At this point, Kirk doesn’t think the Klingons have “saved” him, per se; instead, he thinks the Klingons want him for their own trophy. But once Kirk is beamed aboard the ship, the Klingon general forces Klaa to apologize to Kirk, and, as the liner notes put it, “a martial take on the Klingon theme . . . yields to a lyrical, quasi-Americana variation” (starting at the 1:36 mark):

So the Klingon theme that was meant to sound so “barbaric” and “primitive” when it signified “bad guys” now takes on a “quasi-Americana” tone when the Klingons turn out to be on the side of the good guys. No doubt there’s a thesis in there, regarding the cultural stereotypes that music can sometimes perpetuate.

Several years would pass before Goldsmith scored his next Star Trek movie, but when he did, the old generation had given way to the next generation, and the Klingons — as personified by Worf — were now definitely on the side of the good guys.

And so, in Star Trek: First Contact (1996), Goldsmith brought out the Klingon theme several times as Worf helps Captain Picard and others to battle the Borg, beginning with the track below, which uses the Klingon motif when we cut to the inside of the Defiant and find Worf in the captain’s chair (starting at the 0:44 mark):

The Klingon theme makes its final, climactic appearance when Picard and a few of his crew defeat some Borg who are trying to plant some communications equipment on the Enterprise’s deflector dish; when the dish is separated from the ship, it drifts into space, with some Borg still attached, and Worf blasts it with his rifle and a triumphant “Assimilate this!” (starting at the 6:02 mark in the track below):

So the music still signifies the “aggression” that the Klingons are capable of, but now, the aggression is no longer a sign of their “bad guy” status; instead, it is something that the viewer is fully encouraged to identify with, certainly in contrast to the eerily passive and methodical aggression of the mechanized Borg.

Goldsmith went on to score the next two films — Star Trek: Insurrection (1998) and Star Trek: Nemesis (2002) — as well, and he used the Klingon theme to accompany one of Worf’s kick-ass moments on at least one occasion that I can remember, in Insurrection. But he didn’t really do anything new with it on a musical level; he just wove it into an action sequence the way he did in First Contact.

Still, it is fascinating to chart the evolution of Goldsmith’s Klingon theme — and what it represents — over the two decades or so that he scored these films. As the Klingons were increasingly humanized within the Star Trek franchise, the music that once relied on exotic instruments and avant-garde otherness to signify their “bad guy” status eventually came to be nothing more than a sort of ethnic marker that identified the Klingons as just one culture among many: this music is what they sound like, and it can signify Klingon heroism just as easily as it can signify Klingon villainy.

Goldsmith wasn’t the only composer to create music for the Klingons, of course. Two other significant contributors come to mind: James Horner, who scored Star Trek III: The Search for Spock (1984), and Cliff Eidelman, who scored Star Trek VI: The Undiscovered Country (1991). But I’ll say more about them in a later post.

April 30, 2013
Lawrence of Arabia gets a six-hour mini-series
Next Post

May 12, 2013 Music for Klingons, part two: James Horner
Recent Comments
1 Comment | Leave a Comment
"I wish I had a lamp I would only need 1 wish not even 3 ..."
Ararara Listen: The audio trailer for Audible’s ..."
"Thats it im going to find the duchess and be a student of her i ..."
Reuben Fourie Noah and Moses reunite for Thor: ..."
"Because of the best comics, I'm dying.... That's great👉🏻👉🏻aO.MARTIALGIPHY.COM/x4647uA"
AsheFall22 Young David animated series coming in ..."
"Sergey is so annoying😑iy.636WB.CO/X4647qe"
fuble Is Terrence Malick’s Jesus movie coming ..."
Browse Our Archives
Related posts from FilmChat