Lawrence of Arabia gets a six-hour mini-series 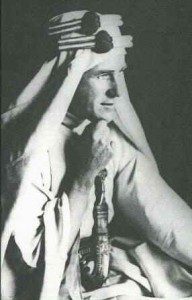 So it is with a certain inevitable trepidation that I greet the news that Emmerich is producing a six-hour mini-series about T.E. Lawrence, the British soldier who is known to the world as “Lawrence of Arabia”.

Thankfully, the series does seem to have at least one serious biographer on its side, said person being Michael Korda, author of the 2010 book Hero: The Life and Legend of Lawrence of Arabia. So maybe that will help rein in some of Emmerich’s crazier impulses.

Deadline reports that the mini-series will “follow the journey of British Army officer Lawrence during World War I,” which, if true, is a bit disappointing, as that’s pretty much exactly the same part of his life that David Lean already covered in Lawrence of Arabia (1962) — a film that, for all its greatness as a work of cinema, is somewhat lacking from an historical point of view, because it tacitly suggests that Lawrence had no involvement in the Middle East before or after his military exploits.

As it happens, though, Lawrence was an accomplished archaeologist before the war — having worked on the Carchemish excavation with Sir Leonard Woolley between 1911 and 1914 — and he went on to be a major political player after the war; the Middle East has the borders that it does today, and thus has the conflicts that it does today, in no small part due to Lawrence’s influence. So you would think that a six-hour mini-series might provide ample opportunity to take a step back and put the man’s military career into the broader context of his entire life — but perhaps not.

For what it’s worth, Lawrence’s activities after the war have been dramatized before, most notably in the TV-movie A Dangerous Man: Lawrence after Arabia (1992), which starred Ralph Fiennes as Lawrence and Star Trek: Deep Space Nine’s Alexander Siddig as Prince Feisal, the character played by Alec Guinness in the David Lean film. Lawrence’s involvement in the Paris Peace Conference was also depicted in an episode of The Young Indiana Jones Chronicles (1993); there, Lawrence was played by Douglas Henshall, and Feisal by Anthony Zaki.

And of course, Lawrence’s post-war activities might also be depicted in Queen of the Desert, a biopic of Lawrence’s fellow adventurer Gertrude Bell that is currently in development; in that film, he is currently set to be played by Robert Pattinson.

Incidentally, it is possible to see vintage newsreel clips of Lawrence, Feisal and their associates on YouTube; here are two such videos:

For more details on the upcoming Emmerich production, see the stories in Variety and The Hollywood Reporter.

May 7, 2013 Music for Klingons, part one: Jerry Goldsmith
Recent Comments
0 | Leave a Comment
"I have neither noticed that much. I recenty read a leadership book inspired from Cyrus ..."
Hamid Mortazavi Cyrus the Great — a Persian ..."
""AD" stands for "Anno Domini", a Latin expression meaning "In the Year of Our Lord".So ..."
Peter T Chattaway The Chosen — season one, episode ..."
"Why does it say at the start of episode 3 that it takes place 26 ..."
Desiree Chamberlain The Chosen — season one, episode ..."
"What about Hellboy, The Grudge, Ghoulies, and Anaconda?"
45th Spiderbob Group VGCP When R-rated franchises go PG-13 …
Browse Our Archives
get the latest updates from
FilmChat
and the Patheos
Entertainment
Channel
POPULAR AT PATHEOS Entertainment
1