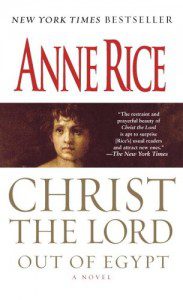 The long-gestating film adaptation of Anne Rice’s Christ the Lord: Out of Egypt now has a release date — or at least a release month. It was announced today that FilmDistrict has acquired U.S. distribution rights to the film and plans to release it in March 2015.

The book, which depicts the return of Jesus and his extended family to Galilee when Jesus is a young boy, was originally going to be adapted by a brand-new Christian company that said it was in the business of making “Spiritainment” — but those plans fell apart in 2007.

Then, in 2011, Harry Potter director Chris Columbus bought the rights to the book and hired Cyrus Nowrasteh, director of The Stoning of Soraya M. (2008), to co-write and direct the film.

Rice intended the book to be part of a four-part series on the life of Christ, written in the first person from his perspective, but so far, there has been only one sequel: Christ the Lord: Road to Cana, which came out in 2008.

In 2010, Rice famously renounced Christianity but without renouncing Christ himself, stating that “following Christ does not mean following His followers.” If she continues her four-book series, it will be interesting to see how this development affects her portrayal of the relationship between Jesus and his earliest followers.

June 21, 2013 The death, resurrection, and second death of Lazarus
Recent Comments
0 | Leave a Comment
"Mark 3:21, 31: "When his family heard about this, they went to take charge of ..."
Peter T Chattaway The Chosen starts shooting its second ..."
"Where do you get the idea that Jesus' mother and brothers were there to intervene ..."
tmirus The Chosen starts shooting its second ..."
"This was a refreshing read. I'm an average fan of Hellboy but I'm also a ..."
Andrew Mathews Doug Jones on Hellboy and Christianity.
"Great interview! One thing I've wondered since watching Season 1 is why they didn't include ..."
A.J. Cattapan Interview: The Chosen writer-director Dallas Jenkins ..."
Browse Our Archives
get the latest from
FilmChat
Sign up for our newsletter
POPULAR AT PATHEOS Entertainment
1