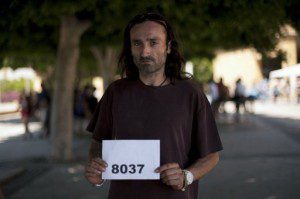 More evidence that Ridley Scott really is making a Moses movie: Agence France-Presse reports that “jobless Spaniards” are lining up for “slave wages” as extras on the set of Exodus, which is set to start shooting in Spain in mid-October. Approximately 15,000 people turned up at casting calls in two cities, hoping to be among the 3,000 or 4,000 who will actually end up in the film. AFP reports that the casting directors were “looking for people with skin that appears to be of African or Arab ethnic origin, beards, and, above all, thin physiques.” That last detail, says casting director Nerea Herrero, is due to the fact that “we need people who look like slaves and they were starving.”