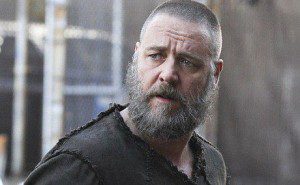 Now this is my kind of nit-picking.

Jeffrey Wells wrote a blog post the other day in which he complained that the buzz cut worn by Russell Crowe in the Noah trailers is historically improbable.

To make his case, Wells began by linking to the Wikipedia entry on scissors, which states that the earliest known scissors were made in Egypt or Mesopotamia sometime between 2000 BC and 1500 BC. This would place the invention of scissors well after the Flood, which — for those who believe it was an historical event — is thought to have occurred no more recently than 2349 BC, and possibly much earlier.

However, Wells did not object to the idea that Noah may have used scissors, per se. (It is not clear whether Wells thinks a gap of a few centuries is no big deal, or whether he simply confuses “2500 BC” with “2500 years ago”, thus dating Noah to some point long after the invention of scissors.) Instead, what bugged him was the idea that Noah could have had a cut that looked like it was the product of “electric barber shears”.

One of Wells’s commenters noted in reply that Noah could have had hair like that if he had shaved his head completely bald “with a knife, dagger or razor” and then left it alone for a few weeks. But if it turns out that Noah sports the same buzz cut for a lengthy stretch of the film, then who knows, Wells’s criticism just might stick.

My only contribution to the debate would be to note that we don’t know yet what kind of technology the people in Darren Aronofsky’s film will actually have at their disposal. We know that the film will depict angelic beings known as the Watchers, and that these beings, according to the Book of Enoch, taught humanity “arts and technologies such as weaponry, cosmetics, mirrors, sorcery, and other techniques that would otherwise be discovered gradually over time by humans, not foisted upon them all at once.” Presumably these technologies were wiped out by the Flood. And maybe, just maybe, these technologies could have allowed for buzz cuts, too.

November 24 update: Parts of this blog post have been re-written since it was first posted, partly because I realized I misunderstood one of Wells’s original points.