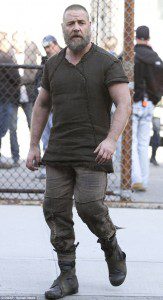 It’s been a few weeks since our last photographic update from the set of Darren Aronofsky’s Noah, so here’s another round.

The Daily Mail has half-a-dozen pictures of Russell Crowe walking around in costume — and the most striking thing about these pictures, to me at least, is the shaved head. In the photo that the studio released two months ago (the Mail is incorrect when it claims that these new pictures represent our “first look” at Crowe in character), Crowe’s beard was a little smaller but the hair on top was definitely longer. So where did it go? Is Crowe making room for a wig? Or does Noah shave his head at some point in the story?

The Crowe pictures were presumably taken by the usual paparazzi, but some of the other pictures coming from the Noah set have had a slightly more official imprimatur. A few weeks ago, writer-director Darren Aronofsky tweeted a few pictures depicting “extras of the day/night”. There’s nothing too revealing here, but they do give a hint of the basic aesthetic of the film: 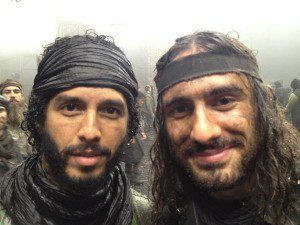 And, finally, the Ark itself. New York magazine’s Vulture blog recently posted the image below of the mostly-completed Ark, which has progressed nicely since Aronofsky first tweeted an image of the Ark under construction back in July. 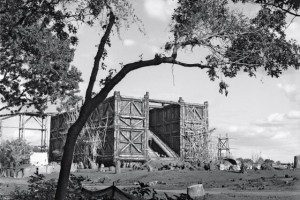 The vessel Aronofsky’s people have built sure doesn’t look like any of the Arks that I saw in films or books when I was growing up — it’s neither the curved boat of John Huston’s The Bible: In the Beginning… (1966) nor the long rectangular box popularized by In Search of Noah’s Ark (1976) — but it looks sturdy enough, and it’s not like the Ark was actually designed to travel anywhere; as long as it stayed afloat for a year and kept all of its passengers alive, that was all it really needed to do. In its simple commitment to functionality, Aronofsky’s Ark is almost kind of reminiscent of a Borg cube, which I doubt was intentional, but hey, if it gets the job done, it gets the job done.

October 20, 2012
New Zealand life-of-Jesus film coming back from the dead?
Next Post

October 25, 2012Son of Man: An African Jesus -- new book coming in 2013
Recent Comments
0 | Leave a Comment
Browse Our Archives
get the latest from
FilmChat
Sign up for our newsletter
POPULAR AT PATHEOS Entertainment
1