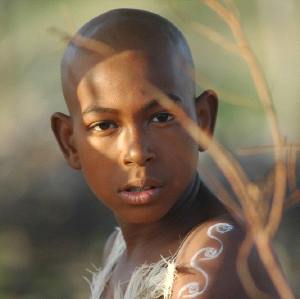 Nearly seven and a half years ago, I blogged the news that some South African filmmakers were preparing a modern-day version of the life of Jesus, featuring a primarily black cast. Less than a year later, the film — called Jezile or, in English, Son of Man — began touring the festival circuit, and I posted links to some of the early reviews. And then, a few months later, I was able to offer my own (very brief) two bits when I caught the film at a local festival. (I also gave a nod to the film in an article I wrote around that time on ethnicity in Jesus films.)

I haven’t seen the film since then, but friends of mine have taken a deeper look at it every now and then. Matt Page, of the Bible Films Blog, has posted several in-depth looks at the film and its themes, and now I am told that Sheffield Phoenix Press is publishing a collection of essays next year called Son of Man: An African Jesus. The book is edited by Richard Walsh, Jeffrey L. Staley and Adele Reinhartz, and it includes 17 essays by a wide range of scholars, including Jesus-movie experts whose works I have reviewed in the past, plus two scholars who edited books on Jesus movies that I have contributed to in the past. I’m definitely looking forward to it.

October 31, 2012 Flashback: Three different takes on Martin Luther
Recent Comments
0 | Leave a Comment
"I found Hanky Panky a pretty cool 80s movie when I first saw it on ..."
UniblabBR Sidney Poitier marathon: Hanky Panky (1982) ..."
"In 1972, yes. The movie was made in 1956 but the ratings system didn't exist ..."
Peter T Chattaway One of the reasons I do ..."
"And to think... this movie was rated G? It was."
Bishop One of the reasons I do ..."
"John 7:5 states explicitly that the brothers of Jesus did not believe in him, at ..."
Peter T Chattaway The Chosen starts shooting its second ..."
Browse Our Archives
get the latest from
FilmChat
Sign up for our newsletter
POPULAR AT PATHEOS Entertainment
1