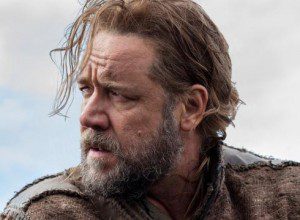 First, and most significantly, USA Today has just posted an article on the film which includes what I believe is our first look ever at Russell Crowe in character as the titular boat-builder.

And while the article mostly repeats information that is already out there, it does include one detail that I don’t recall coming across before: specifically, the character played by Ray Winstone, who has previously been described as Noah’s “nemesis”, now has a name. And that name is Tubal-Cain — which also happens to be the name of one of Cain’s descendants, as per Genesis 4:

Lamech married two women, one named Adah and the other Zillah. Adah gave birth to Jabal; he was the father of those who live in tents and raise livestock. His brother’s name was Jubal; he was the father of all who play stringed instruments and pipes. Zillah also had a son, Tubal-Cain, who forged all kinds of tools out of bronze and iron. Tubal-Cain’s sister was Naamah.

Hmmm. Tubal-Cain’s sister was Naamah. Where have I heard that name before…? Oh, right, that’s the name of Noah’s wife, as played by Jennifer Connelly in this movie. So is Tubal-Cain Noah’s brother-in-law? Are Noah’s children, in some sense, descended from Cain as well? Could be interesting.

The USA Today story also describes Emma Watson’s character, Ila, as “Noah’s adopted daughter”. When Watson was first cast in the role, however, Ila was described as “a young woman who develops a close relationship with Noah’s son, Shem.” So, it could be interesting to see how that plays out.

In other news, Deadline.com reported today that Madison Davenport has been cast as Ham’s wife Na’el, which is short for Na’eltama’uk.

Deadline.com claims that the character’s name comes from the Bible, but in actuality, it seems to come from the pseudepigraphical Book of Jubilees, where, according to Wikipedia, the wives of Noah and his sons have the following names: 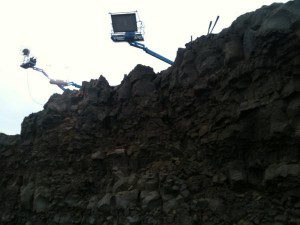 Finally, last week Aronofsky tweeted a picture with the caption “nephilim wuz here”. In Genesis, and in the Book of Enoch, the Nephilim were the offspring of the angelic beings (called “Watchers” by the Book of Enoch) who mated with human women; and the ancient Hebrews believed that the Nephilim were gigantic, just as the ancient Greeks believed that their legendary heroes were gigantic. (Plutarch reports that Cimon recognized the bones of Theseus on the isle of Scyros by their enormous size.) But many people now conflate the Nephilim and their angelic parents and treat them as more or less the same species. So. We already know that Aronofsky’s film will feature six-armed giants called “Watchers”, and now he has tweeted the word “nephilim”. Will these be one and the same in Aronofsky’s film? Or will they be two distinct kinds of beings? As ever, we shall have to wait and see.

August 3, 2012
Yet another biblical cameo in Darren Aronofsky's Noah?
Next Post

August 21, 2012Unforgiven, samurai remakes, and subverted Christ figures
Recent Comments
2 Comments | Leave a Comment
Browse Our Archives
get the latest from
FilmChat
Sign up for our newsletter
POPULAR AT PATHEOS Entertainment
1