Yet another biblical cameo in Darren Aronofsky’s Noah?

First it was announced that Darren Aronofsky’s Noah would feature Methuselah in a significant role. Well, that made sense, because Methuselah was Noah’s grandfather. Then it was announced that the film would feature Cain and Abel in small roles. Well, that made sense, too, given that Aronofsky’s graphic novel features those characters in a prologue, and given that the murder of Abel was one of the first major sins that snowballed into the general wickedness of Noah’s day. And now? It sounds like the film might also feature a character who doesn’t appear in the Bible until centuries after the Flood.

The possible character in question is Og, King of Bashan, who was defeated by Israel’s armies under Moses shortly before they arrived at the Promised Land. (Actually, you could argue that Og and his kingdom were in the Promised Land, even though they were on the other side of the Jordan River, given that Moses gave Og’s territory to one or maybe even three of Israel’s tribes.) And Moses, you might recall, lived long, long after the Flood (roughly 900 years after, according to Bishop Ussher). 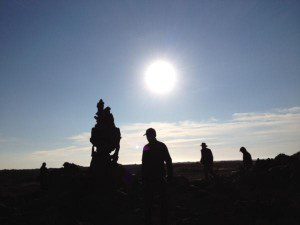 The news about Og comes courtesy of Aronofsky’s Twitter feed, where he has mentioned the name at least twice already: once, with a picture of “me examining og’s leg”, and again, with a picture of “sam in the field getting og ready”. Neither of these pictures reveals very much: the first is a silhouette of an unusual shape, which could be a person in costume, or a statue, or some sort of practical special effect; and the second is a picture of what seems to be a paint-splattered crewmember, rather than a picture of Og himself. But the two pictures do make the point that someone, or something, named Og will be in this movie.

So why, assuming Og is a person and not a thing, would a character from Moses’ day turn up in a movie about Noah? Presumably because Og is described in the Bible as a giant — indeed, as “the last of the Rephaim”, which is one of the races of giants mentioned in the Bible (although the even later stories about Goliath and other giants encountered by David and his men would seem to indicate that the Rephaim persisted for some time after Og’s death). And, as we already know, Aronofsky’s film will definitely play on the legends about giants roaming the Earth in Noah’s day.

Og is mentioned in Jewish folklore as being alive from the time of Noah up until the time of his death in battle with the Israelites. It is also written in the Midrash that he had a special compartment in Noah’s Ark just for him. Aggadah suggests an alternative to this; that he sat upon the top of the ark, riding out the flood for the duration of the storm from this location.

So, if Og does show up in Noah’s day here, it won’t necessarily be an anachronism — certainly not like the one in that ridiculous Noah’s Ark mini-series from 1999, where Noah escapes the destruction of Sodom and Gomorrah before the Flood, and then watches as his old friend Lot turns into a sea pirate. Instead, it could simply be another of the ways in which Aronofsky is using existing apocryphal traditions.

August 9, 2012 A few new details about Darren Aronofsky's Noah
Recent Comments
2 Comments | Leave a Comment
Browse Our Archives
get the latest from
FilmChat
Sign up for our newsletter
POPULAR AT PATHEOS Entertainment
1